Pro leisure on a Greek Island

Part 2 of my trip through the Aegean area.

It was time to leave the mainland and make my way to a Greek island to start pro leisuring. Up until now I had been asking all the travelers I met which island I should go to. The one with the most endorsements was Santorini so I figured that that is where I would go and have my month long beach holiday. The night before I left I decided to look at pictures to see what it was like. After scrolling through a few dozen Google image results I noticed something. There wasn’t a single picture of a beach. Odd considering that it is an island. I asked Dimitris (the hostel owner) what the deal was with Santorini. As it turns out, it is a beautiful island, volcanic with amazing architecture. However, being a volcanic island meant virtually no beaches and the ones that were there were black sand and rocky. Definitely not what I had in mind when I was thinking Greek island vacation. So I pulled up good ole Google maps on the region, changed to satellite view and this is what I saw: 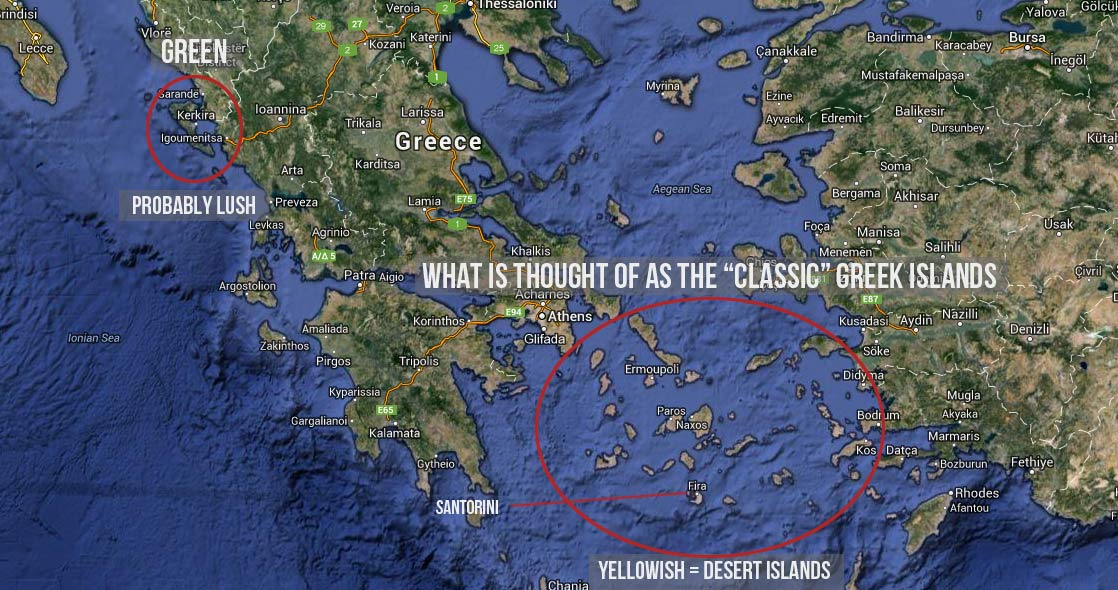 And therein lay a second problem. All the classic Greek Islands were yellowish and desert like. Doing a photo overlay showed some on land pictures and it was the same deal. Desert islands or Santorini, the volcanic island. Off to the northwest was a very green looking island named Corfu. I asked Dimitris if Corfu had beaches and he nodded and that was that. The next morning I was on a bus and then a ferry to Corfu. I arrived on the island slightly lost. I expected it to be much smaller than it actually was. The original plan was to walk around and find a hostel or place to stay. However, after getting off the boat it was clear that wasn’t going to happen. So I had to suck it up, got on Wi-Fi on my phone and typed “hostel Corfu Greece.” The first thing that came up was the Pink Palace. Now, I had heard of this notorious party hostel before arriving and I wasn’t very pleased with the idea. I wasn’t here to party but they had good prices and I decided to check-in for a few days until I found a better base. I rented a scooter and explored the island looking for that perfect nook. Sometime in the morning of the 3rd day I stumbled into the Sunrock Backpackers Hostel and immediately booked a room for the next day. 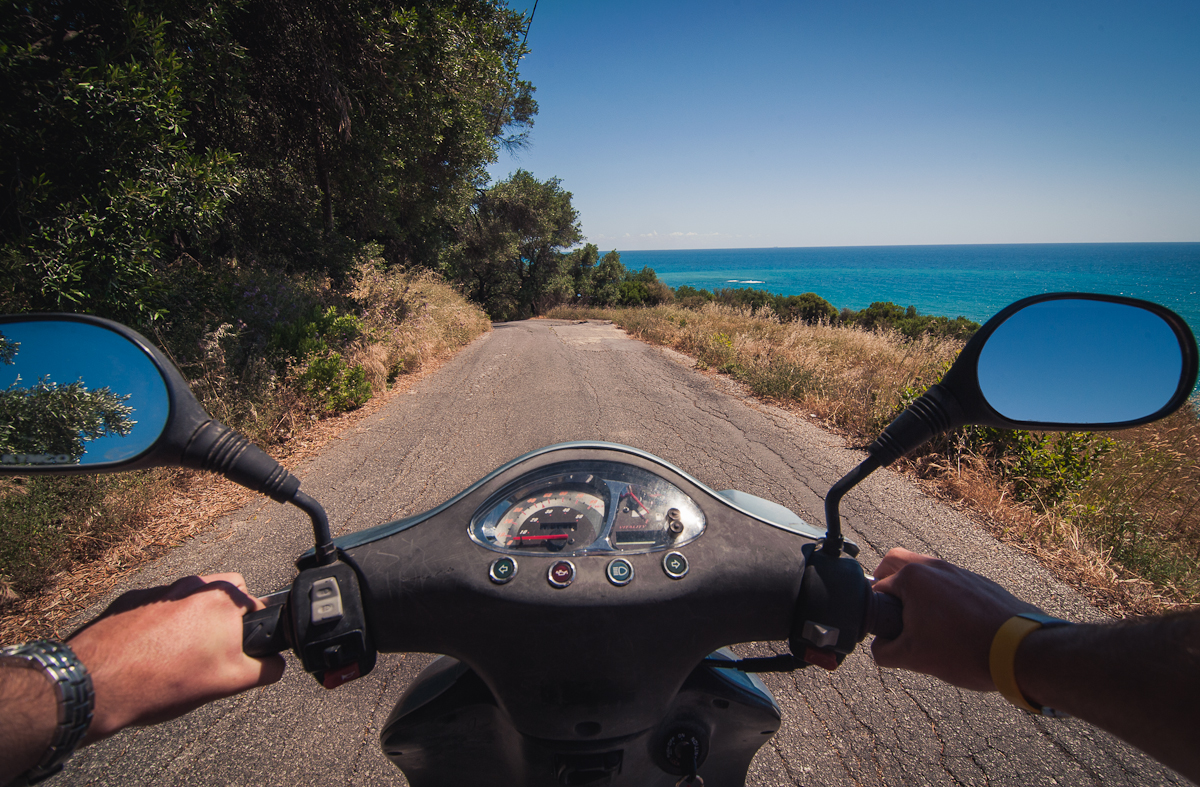 It was the same price as The Pink Palace but offered so much more. An authentic Greek experience where you really get to know the owners and integrate into their Greek family. A better atmosphere and closer to a far superior beach. 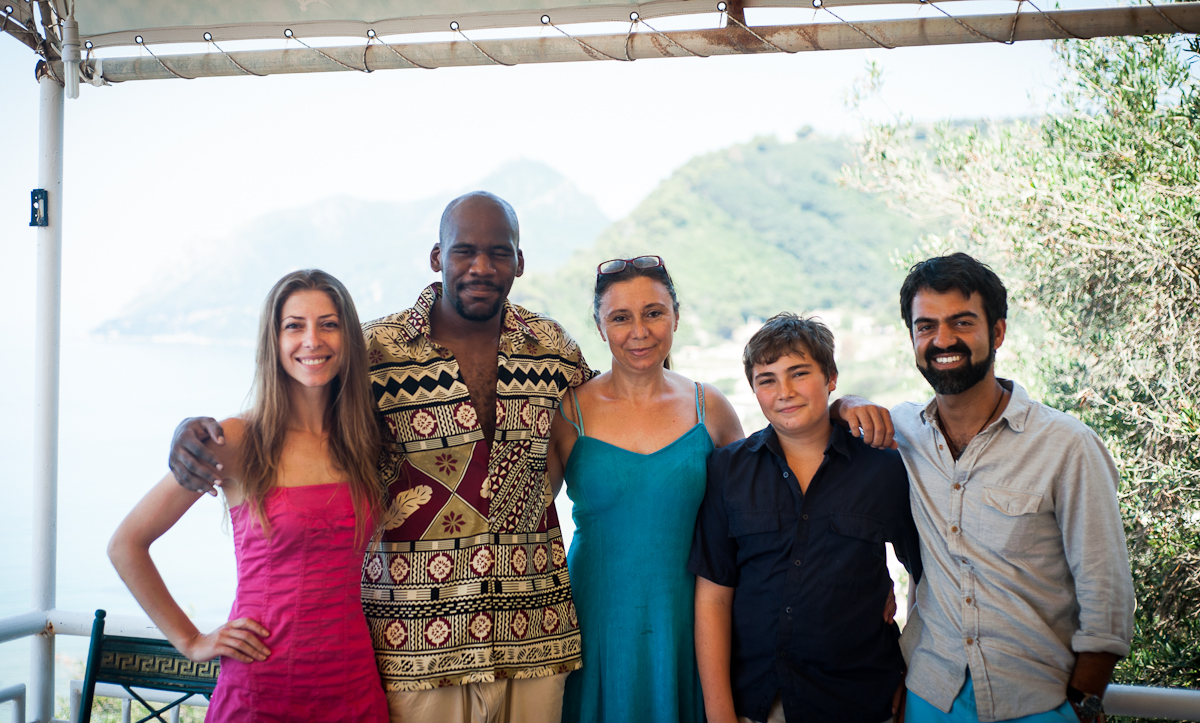 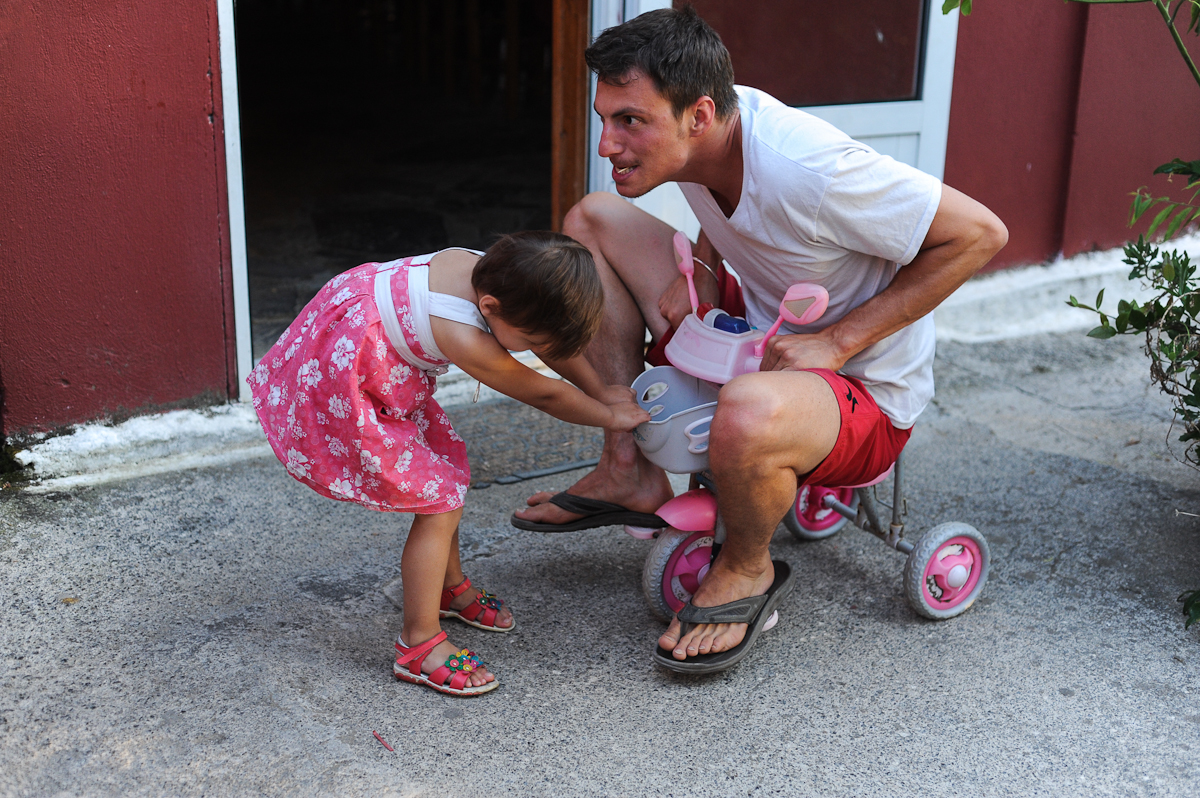 It was laid-back and a stone’s throw from Pelekas Beach. 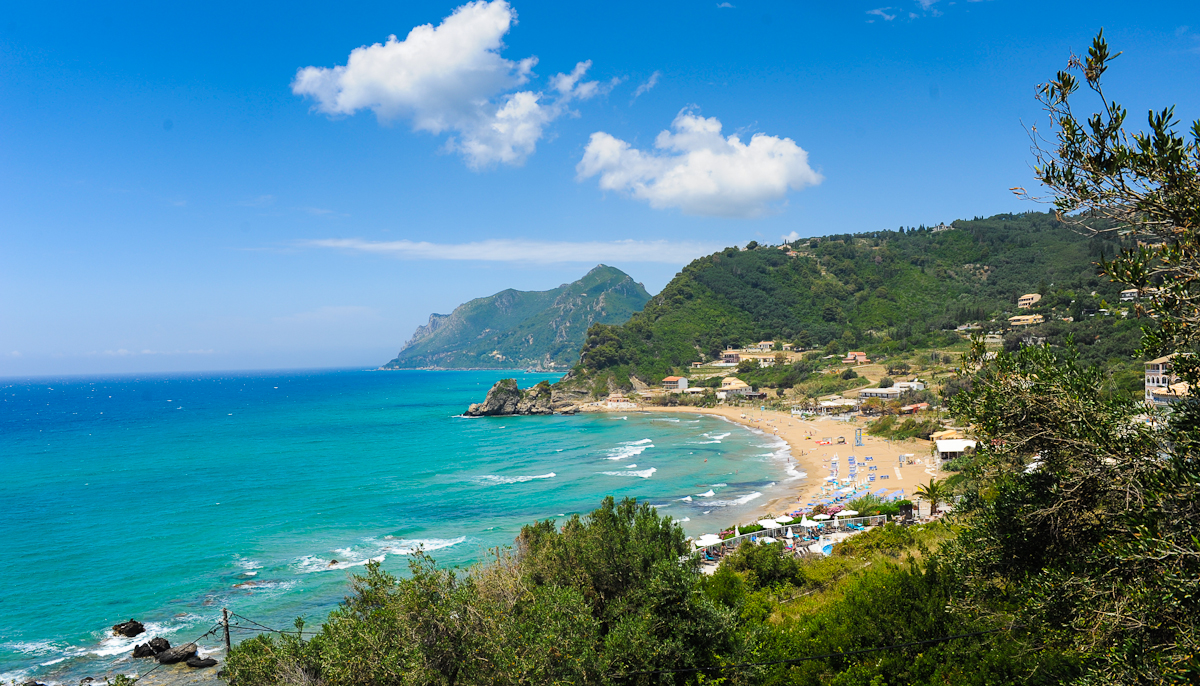 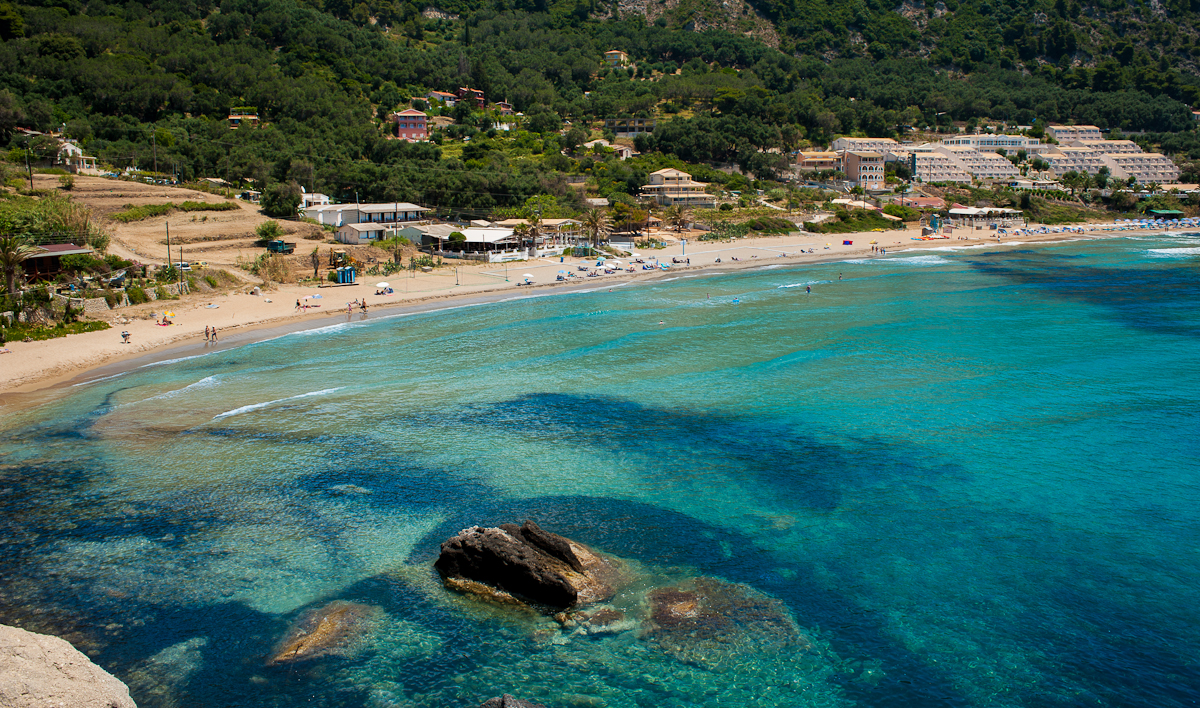 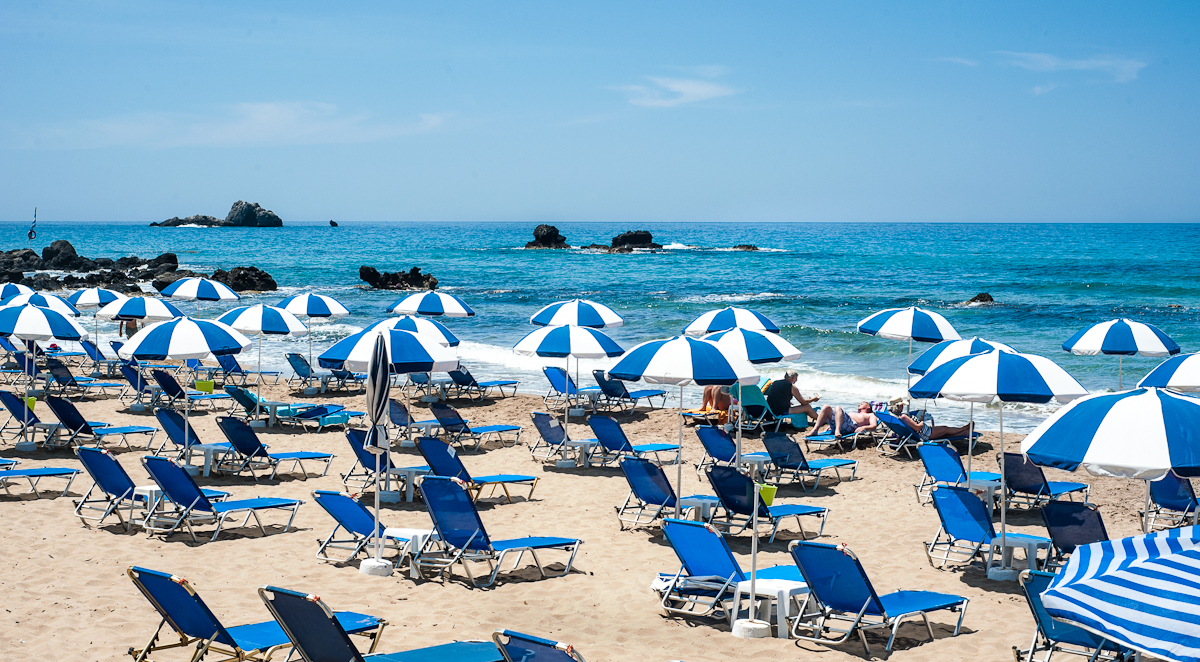 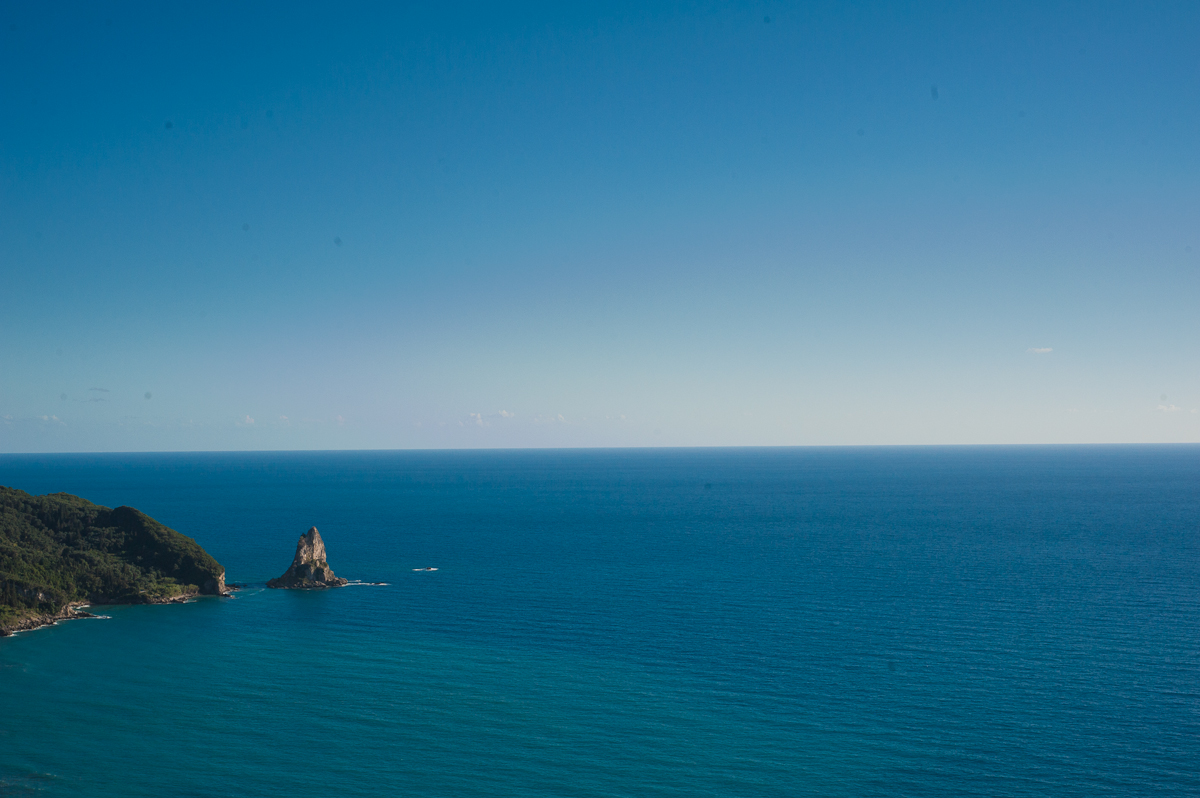 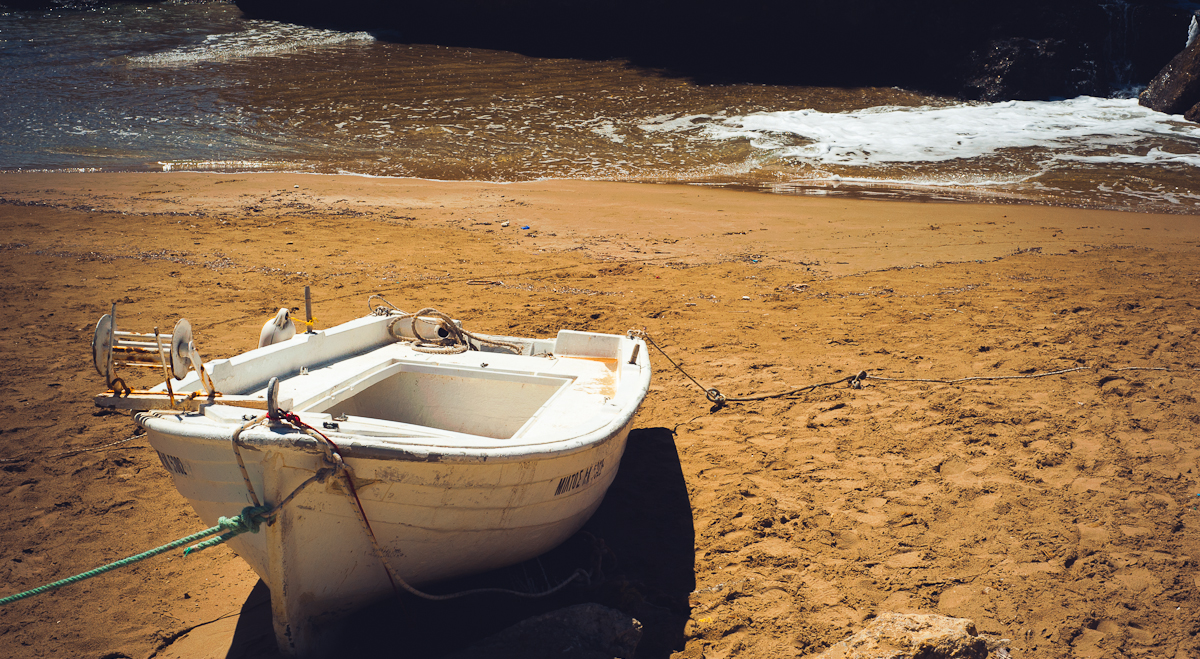 One of the most attractive features was their sundeck that faced west and over the water so the sunsets were epic. every. single. night. 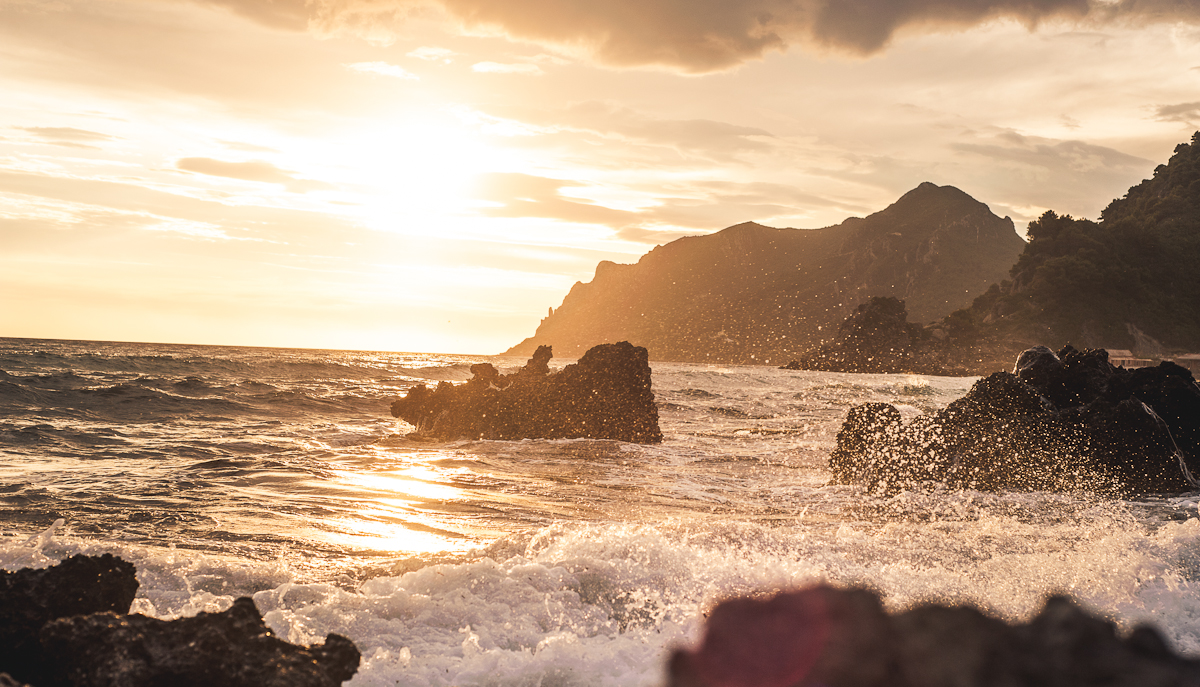 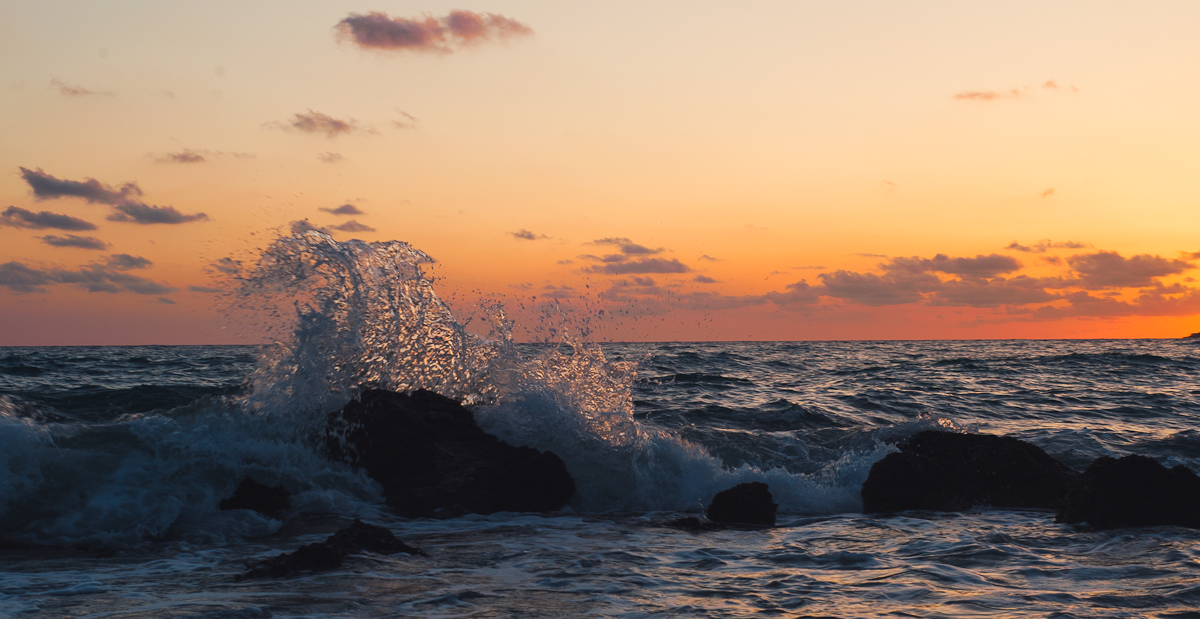 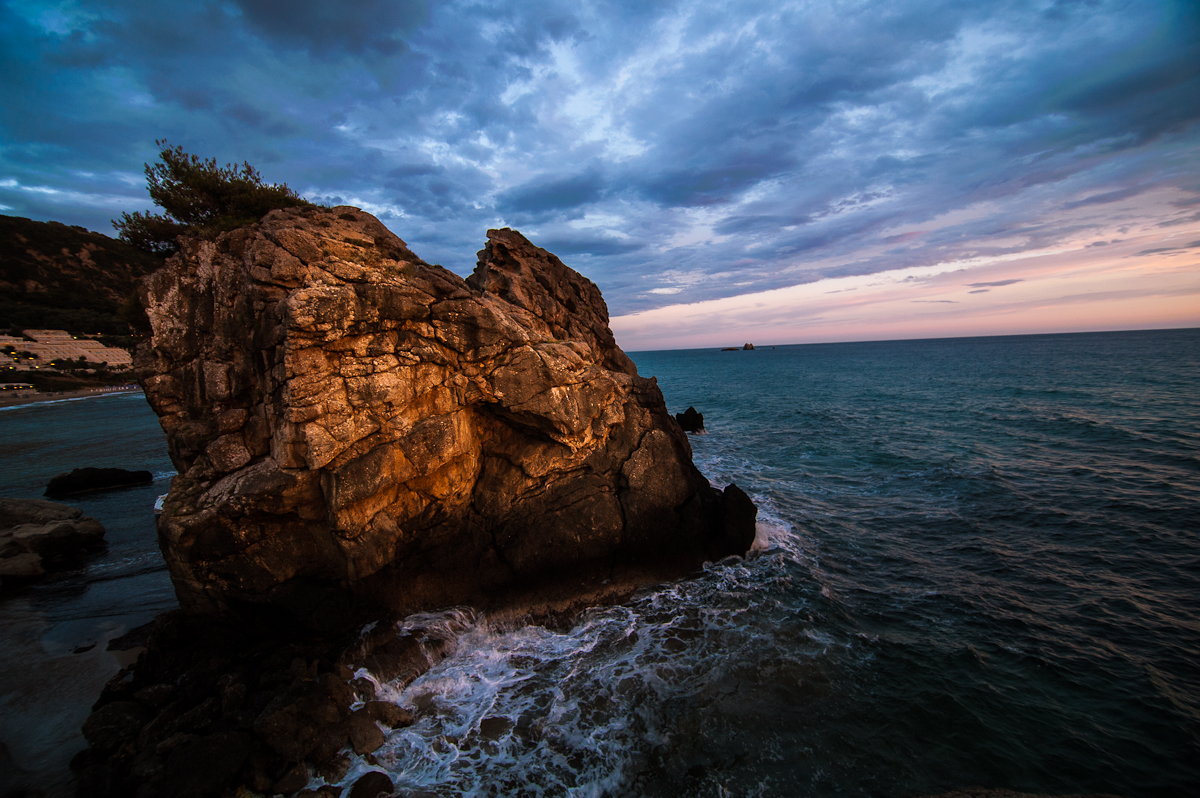 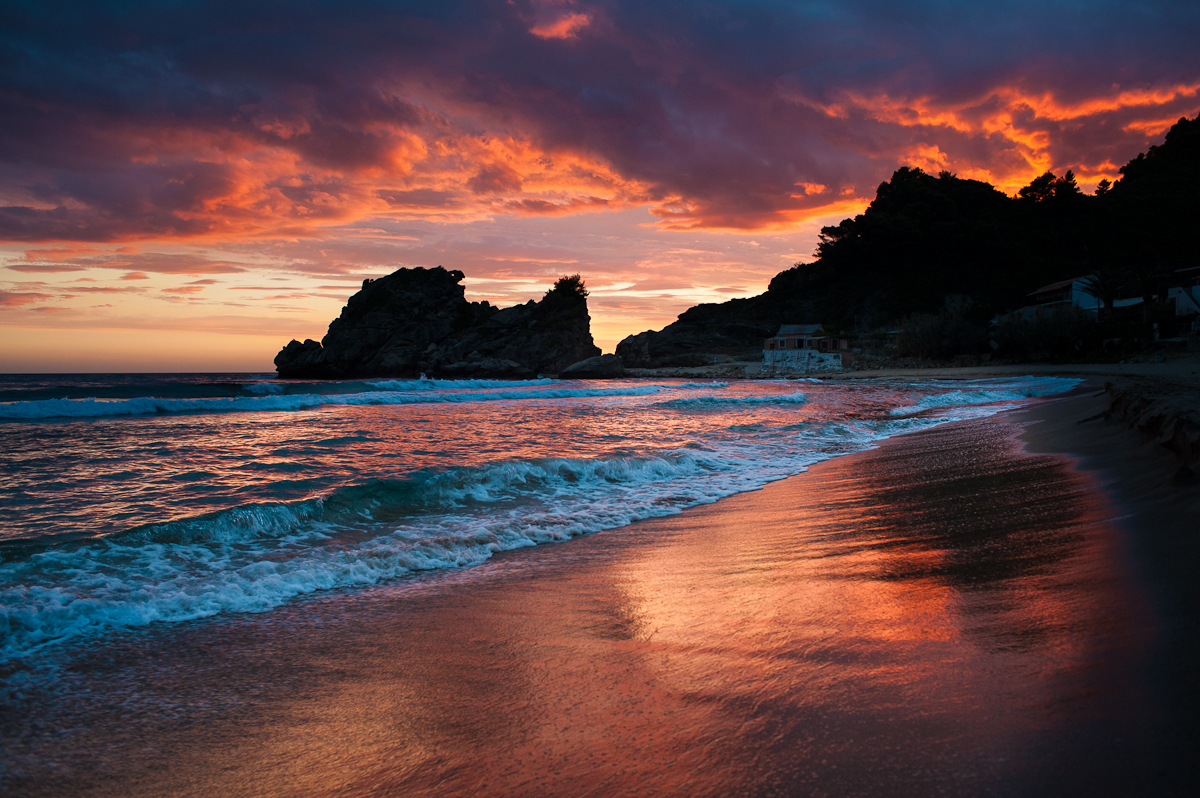 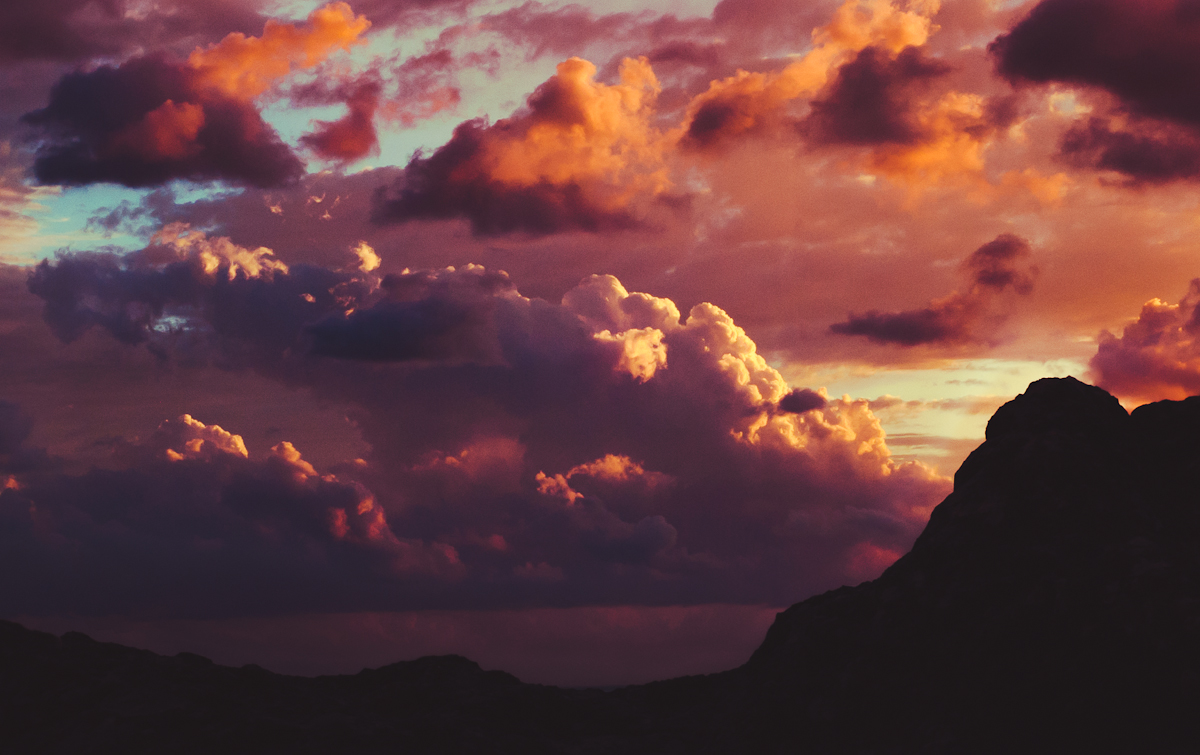 Sunset at Lido Sofia hotel where I’d go to have cold beers sometimes. 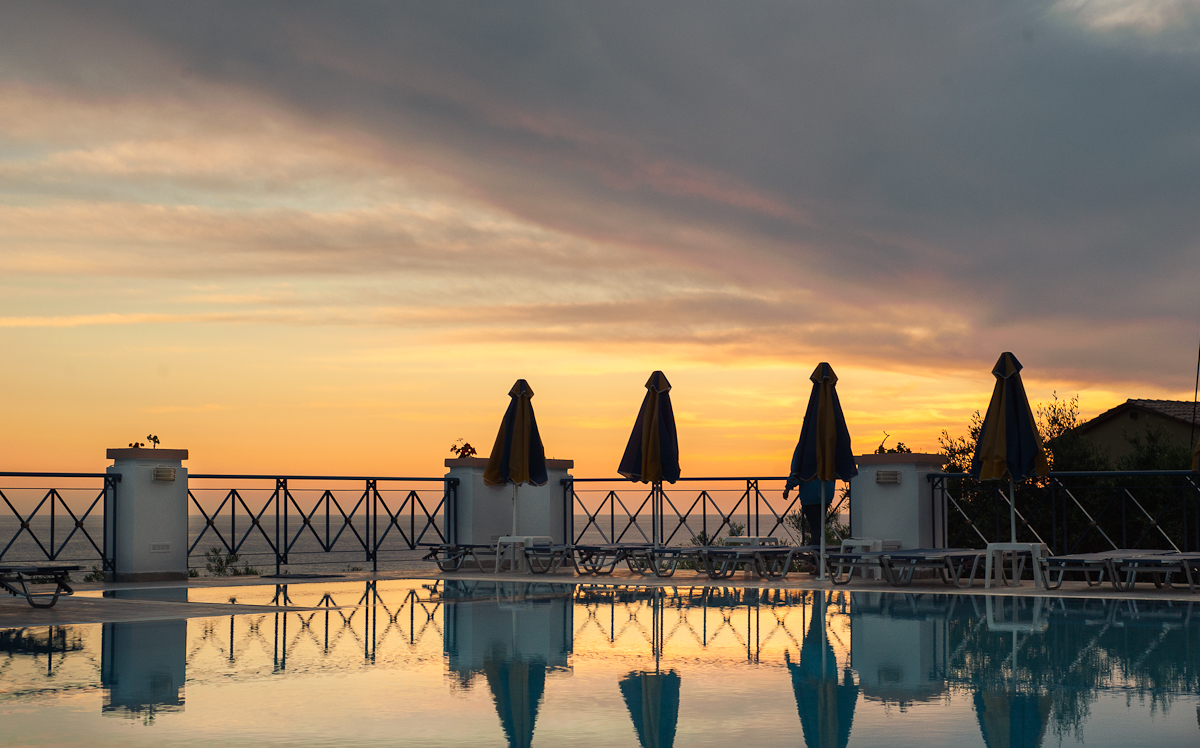 Where they had a very stoic dog. 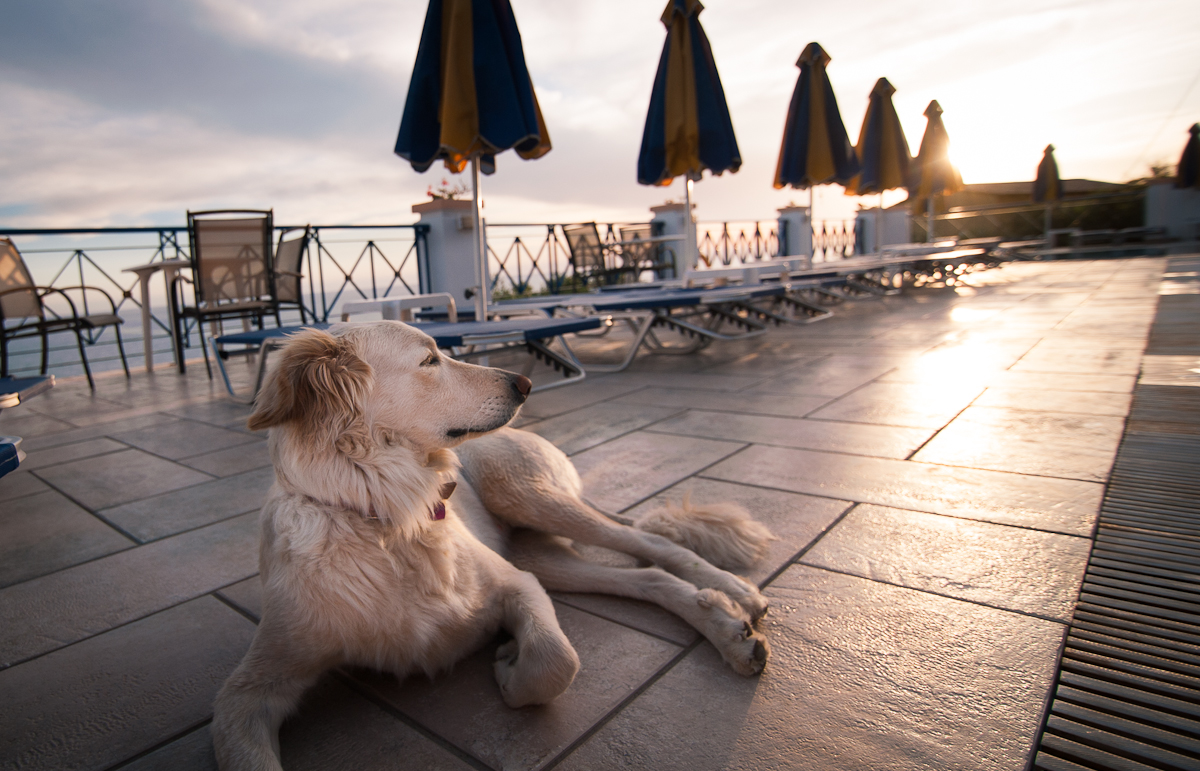 One morning we hiked up a rather rigorous and steep hill to an old fortress to enjoy a panoramic view of the island. From here, sunrises were quite epic as well. 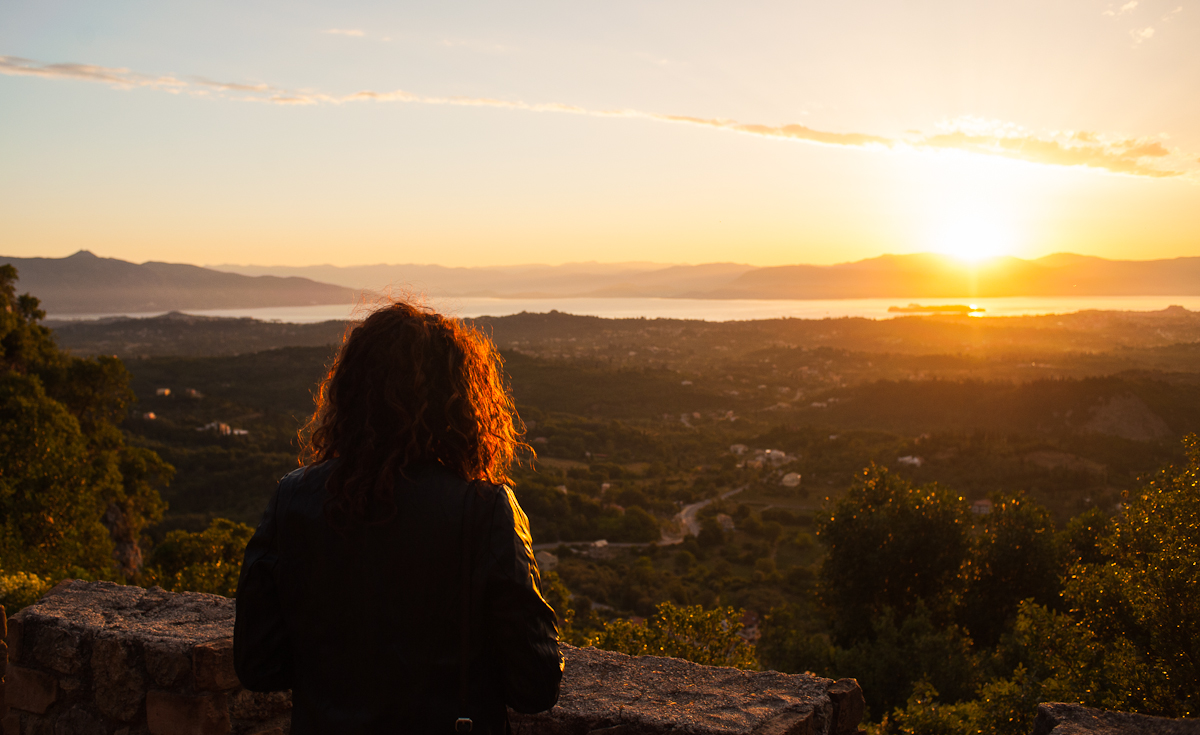 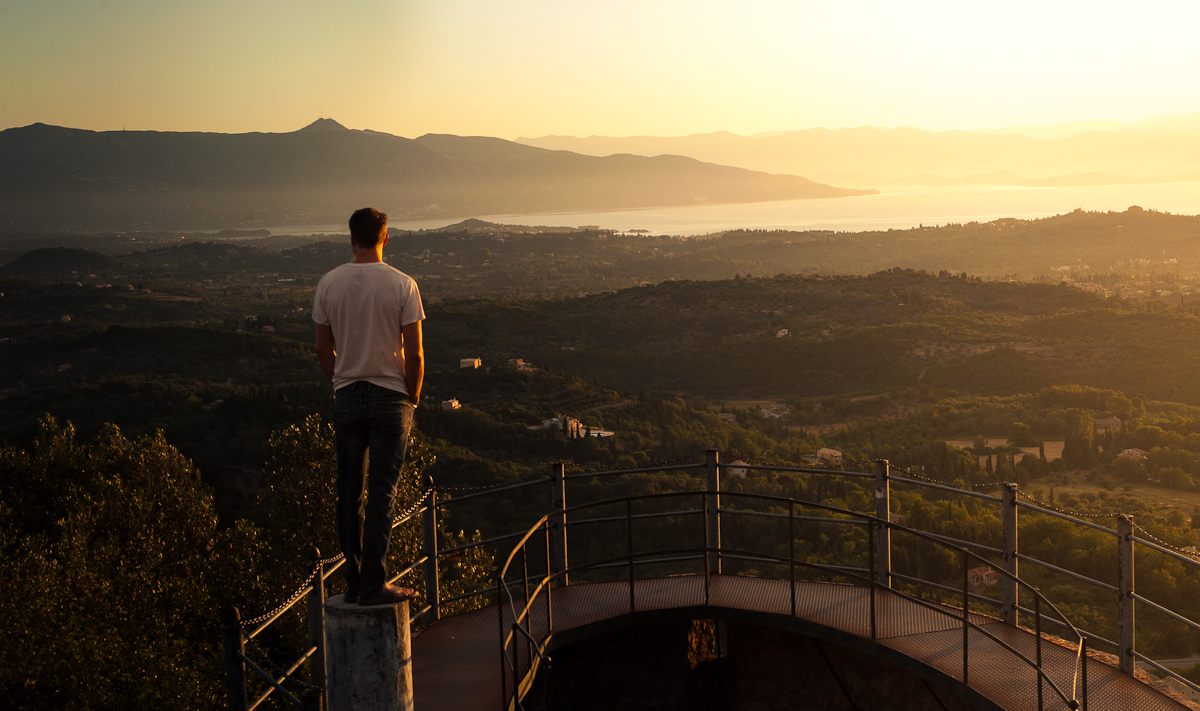 The hostel ran an organic farm a few kilometers away which produced most of our food. Everything we ate was picked within 8 hours. They had eggs, lettuce, garlic, chickens, pigs and grapes. The milk was turned into feta cheese, hard cheese, tzatziki sauce and the grapes were made into their own wine by Spyros (the father and co owner of The Sunrock) who has a passion for wine-making and spends most of his time tending to the grapes. 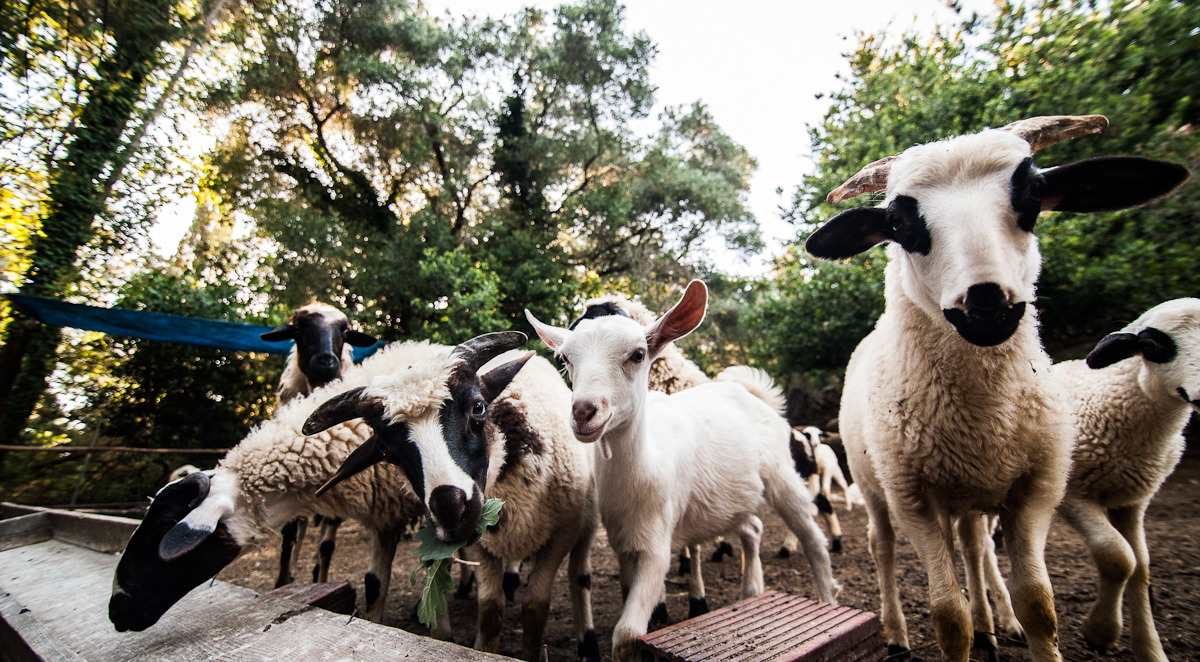 Chickens giving me the death stare. 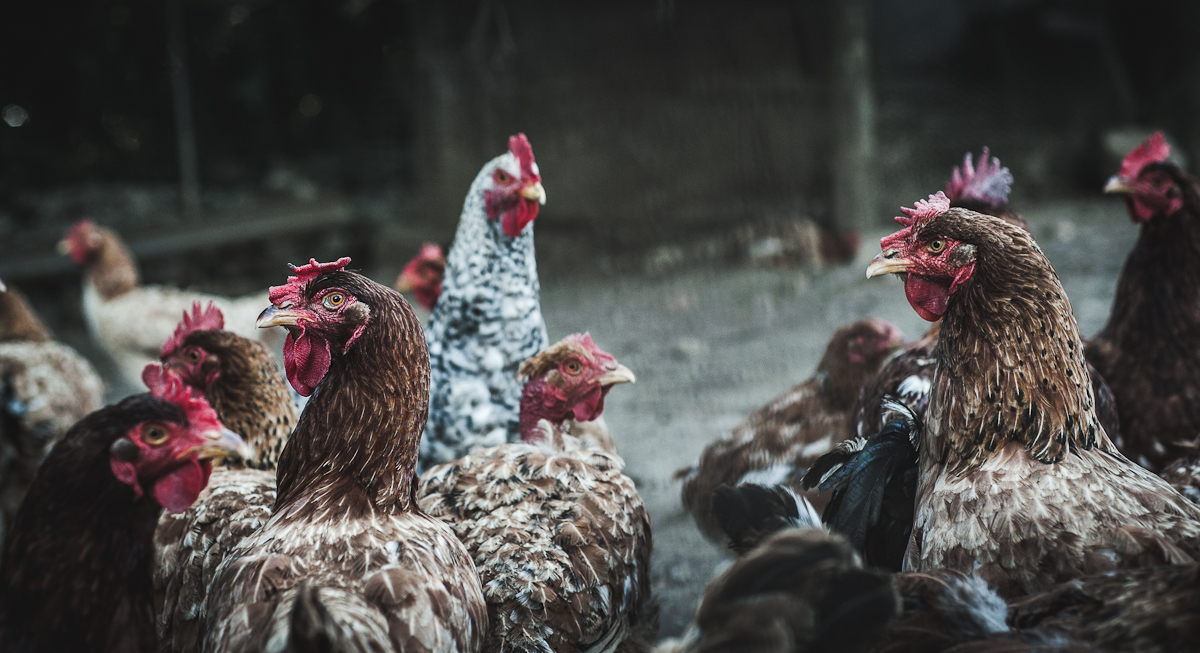 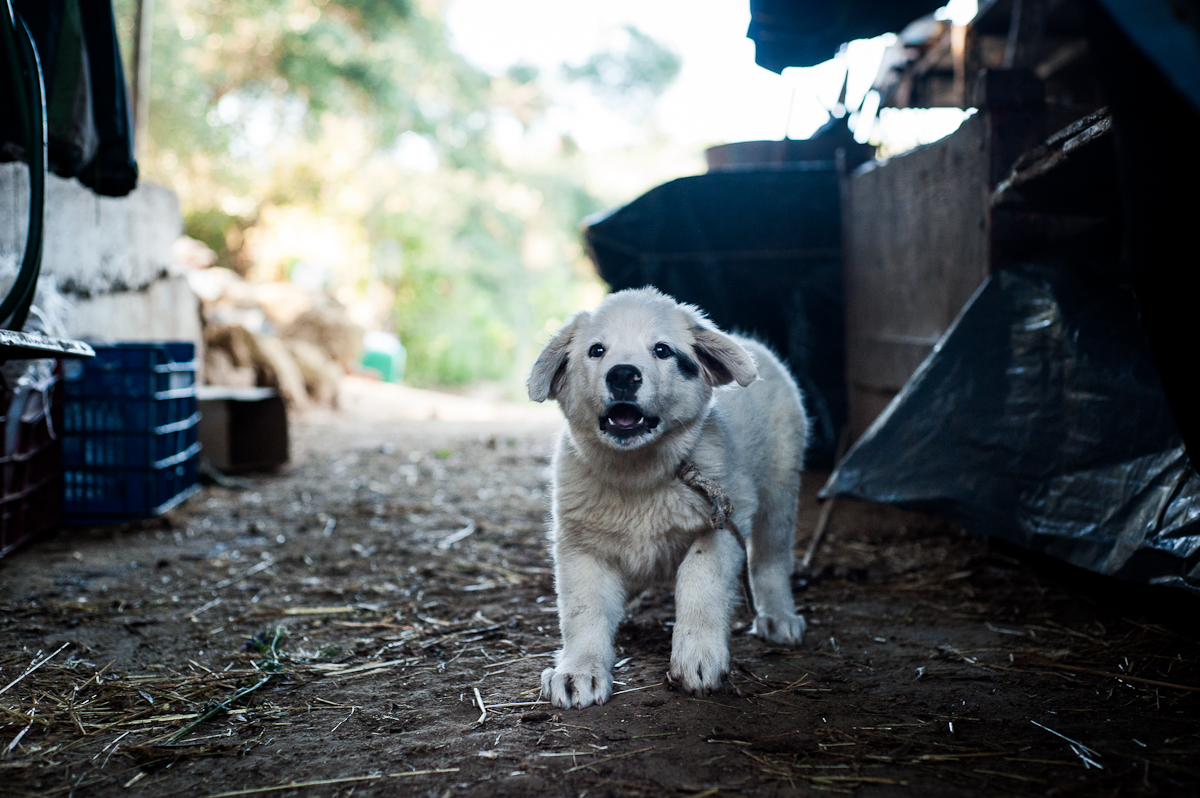 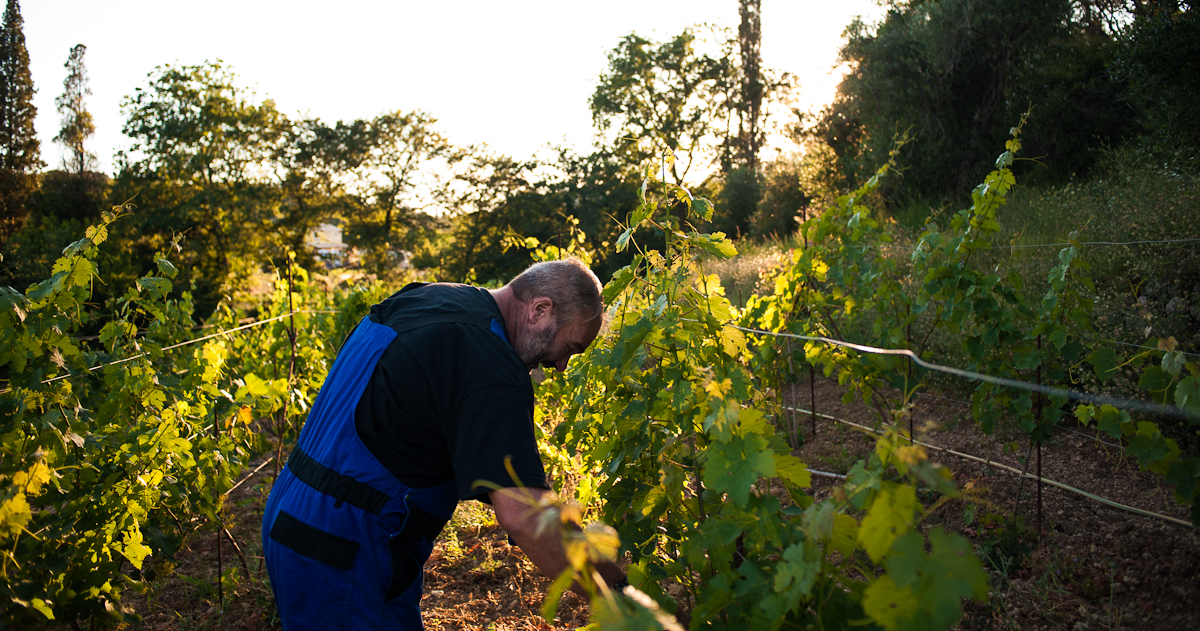 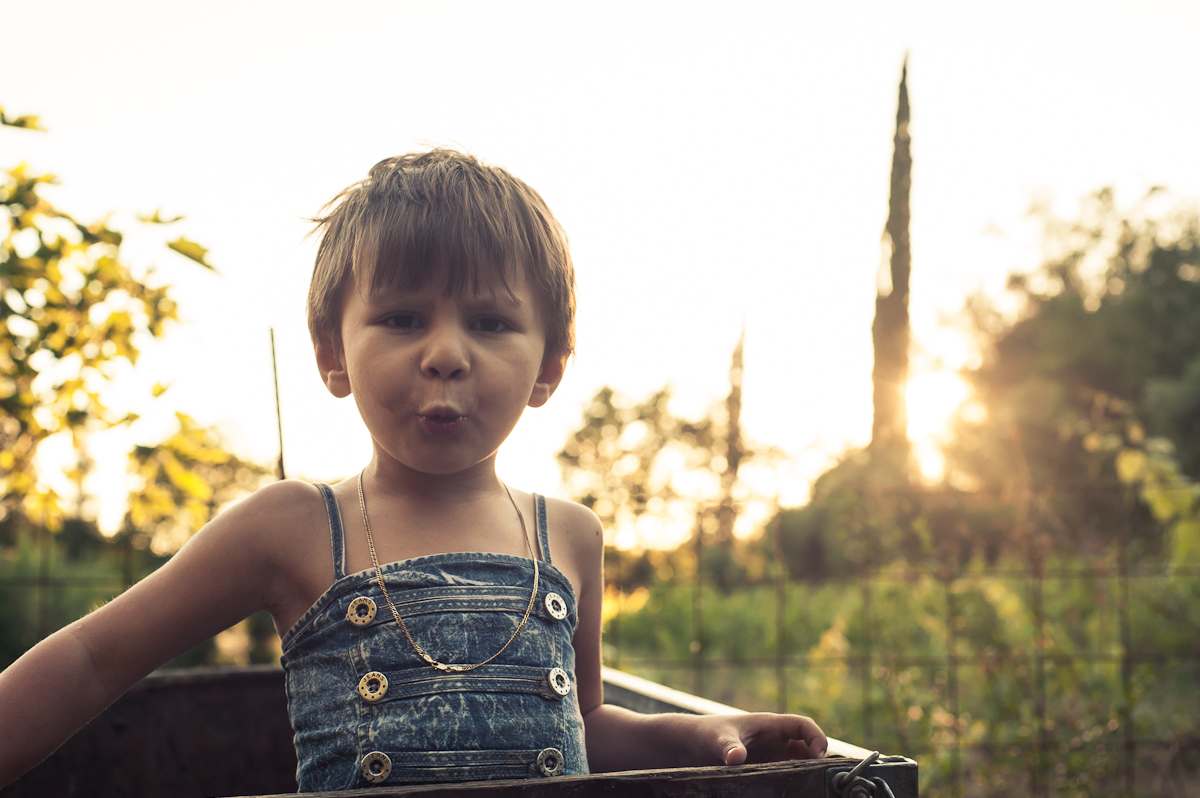 Best of all, this cost me about 10 Euros per day. If you include other incomes, I walked away from these 3 weeks with the exact same amount in my bank account from beginning to end.

I came to a Greek Island with the intent of staying for a long period of time while spending as little as possible. I did this by exploiting my marketable skills and packaging them into something that would be of benefit to hotels and hostels.

I spent a few days approaching several hotels offering web design, photography and SEO (search engine optimization) services. Over the course of those few days, I started realizing that SEO was what really interested the managers. At first I was putting emphasis on user experience, which is what I consider to be the most important for company image and brand. Subconsciously, a user will link the quality of a website with the quality of the company’s products. And some of these hotels had some of the most god-awful, rainbow colored, .gif happy websites. While I thought cleaning up their sites and making it user friendly was the priority, the managers were doe-eyed for Google rankings so I changed my strategy to focus more heavily on that.

I found a few hotels that were interested in one service or another but none of them were looking for a complete package. The compensation for these one-off services were inline with Greek salaries depressed by a recession. The majority of my expenses were going into accommodation so I was really interested in a long-term trade where I had to deal with only one client and get familiar with one hotel.

When I checked into the Sunrock Hostel, I had no idea what their situation was. I just knew that if I kept asking various hotel managers that there was at least one clever manager out there who saw the value in the deal that I was soliciting. When I mentioned what I was trying to do to the manager of the Sunrock, she immediately jumped on the opportunity and we came to an agreement we were both happy with. I ended up staying 3 weeks at The Sunrock, or roughly half of my trip. Accommodation and most food expenses were covered and in exchange I would re-brand, re-design the site and do some location photography. My expenses went from 40 Euro a day down to just around 10. The majority of those 10 were spent on beer as I developed a taste for having a few cold beers in the midday heat and a few at night after dinner while socializing. You can check the site at: sunrockhostel.com

My mornings were spent leisurely catching up with some reading on the sundeck. 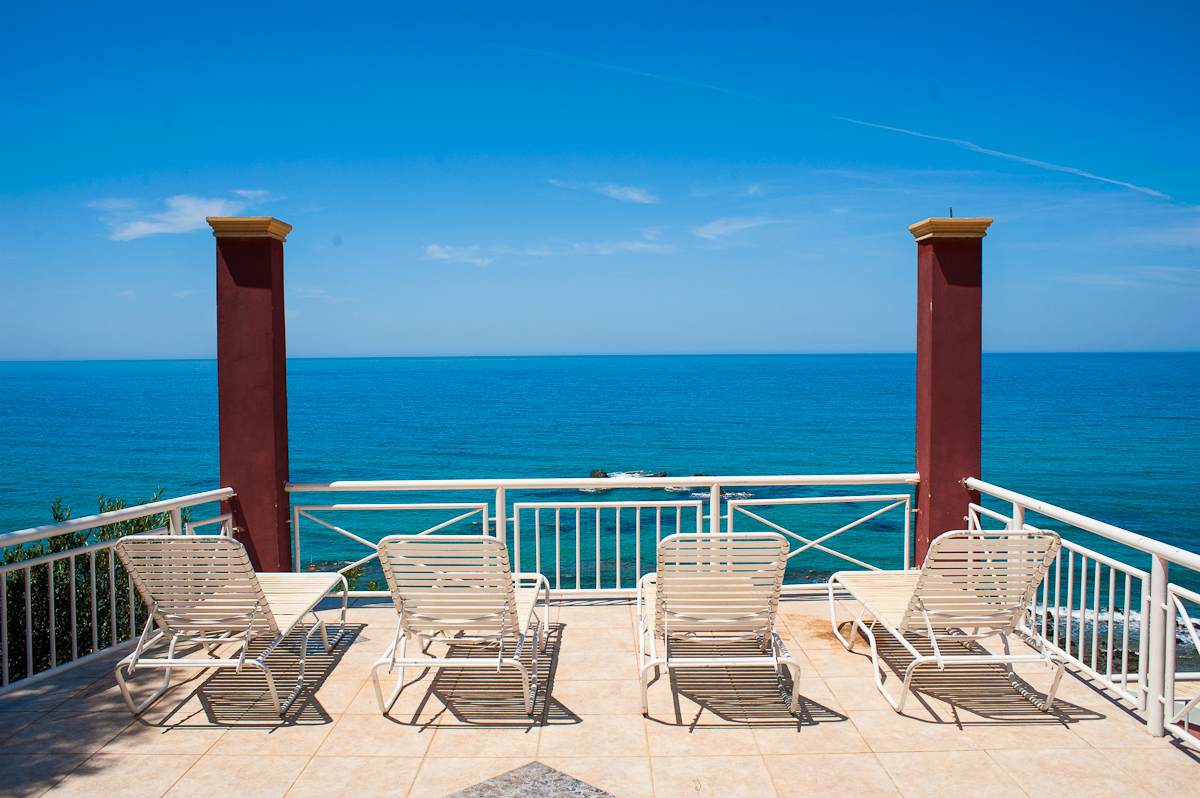 Around the midday heat, I would get on my computer and build the website or edit pictures. In the afternoon I would head down to the beach to swim, read and hike around.

At the same time that I was doing this site, I was finishing one up for a client back in the United States. Completing the last milestone in the project brought in $300. While it isn’t much in the scheme of things, the significance of the number is huge. Basically, while I spent 220 Euro (~$300) over the course of 3 weeks, I also made that same amount back making this 3 week vacation on a Greek island FREE.

Which leads me to this point:
Developing a marketable skill is terribly important. The benefits of such stretch far beyond those of just a career. One shitty aspect of the human psyche is that people assess the worth of others by two metrics. One is relationship value; These are your best friends, those you do not expect anything from except the pleasure of their company. The second is your value to them and how you could help them achieve what they want in their personal lives. Unfortunately, most new relationships start in the second category before migrating into the first. However, observing these aspect of human nature allows you to play off of them. As long as you don’t take the fact that a stranger wants your company because of the benefit you could potentially bring to them, you have the observational leg up. You are able to exhibit your “worth” and foster a symbiotic relationship that moves both parties closer to their goals. 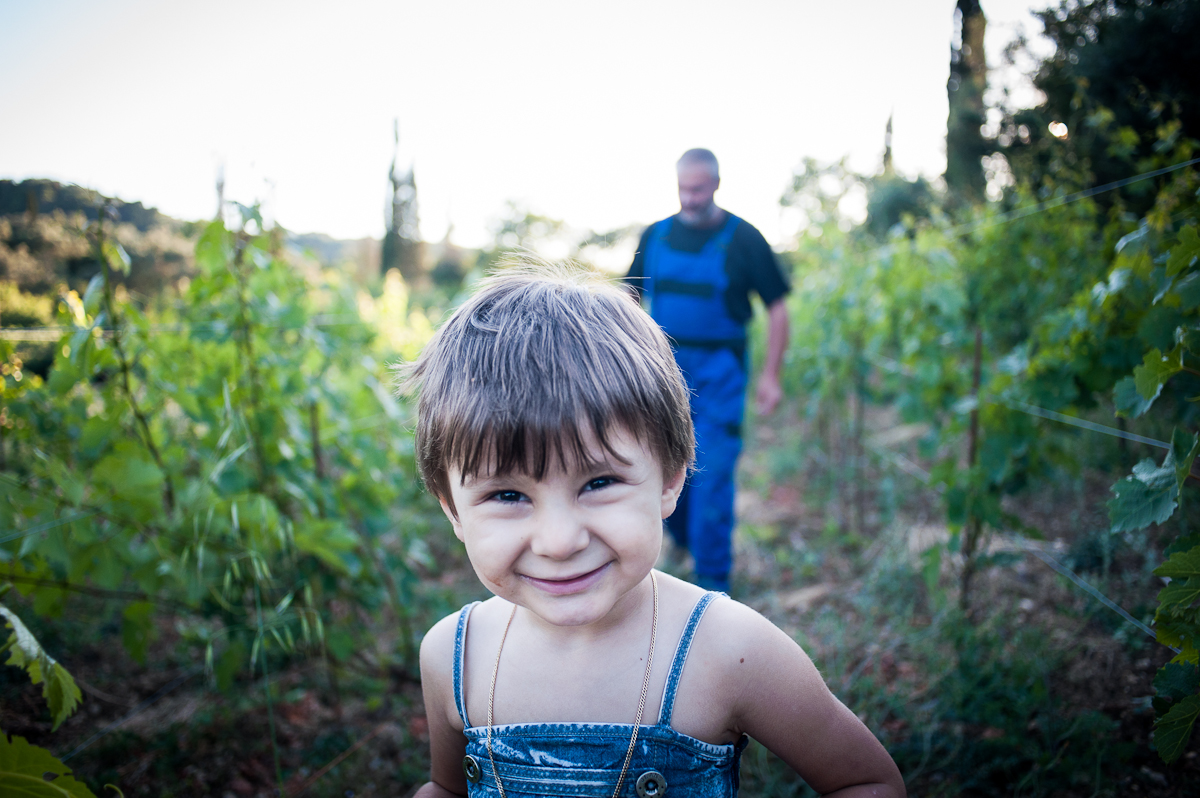