Adventures through Turkey and Greece

Ski season’s over, snow’s melted and it was finally time to go on another ADVENTURE! I wrapped up a few web sites for some local clients and my prospects were looking good. The only on-going project was stoked when I told them I was traveling. I reassured them I would always be within 24 hours of internet and provided a phone number for emergencies. It was time to get up, go adventuring and take some travel photography.

To give an idea of the travel style while approaching this trip: I didn’t decide where I was going until 2 days before I left. I had a date set, but no destination. The options in the running were India, Central America, Iceland and the Aegean area. Between weather and distance and flights, my destination was almost selected for me and before I knew it I was on a flight to Istanbul. 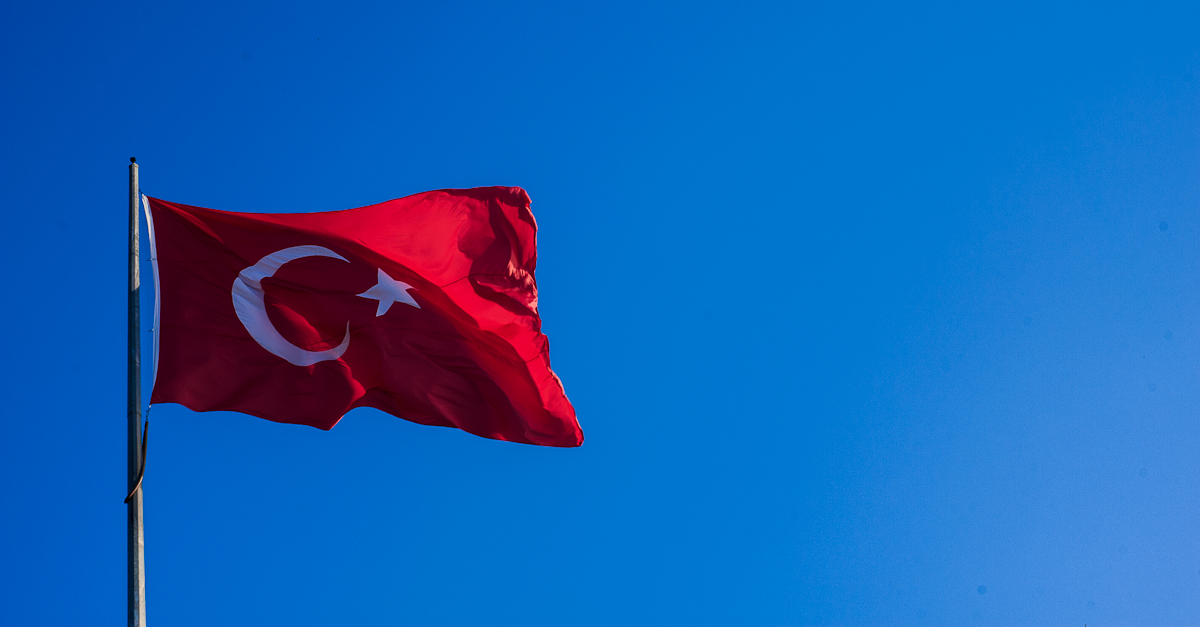 After fate decided my general destination, I needed to fulfill a desire that had been on my mind for a while; To hang out on a Greek island for an extended period of time. It didn’t mean I couldn’t have an adventure along the way.

The route for my trip:

A few things surprised me about Istanbul, especially since I was purposely avoiding information about Istanbul before the trip. First, Istanbul is *HUGE*. Like 37 million people huge. One of the major metropolises of the world. Also, it is much more expensive than I had imagined. The only accommodation I found that was “hostel priced” was a 30 bed dorm. And against all laws of probability, not a single snorer in the bunch.

The first day, I decided to take a ferry over to the Asian side of the city. Istanbul is spread out on three peninsulas and one of the dividing rivers is the official boarder between Asia and Europe. Meaning that when I got to the Asian side I had been on 3 different continents in 24 hours. Pretty schweet feeling. I picked the Asian side because the sun would set to the west over the rest of the city and water making for great photo ops.

The Asian side of Istanbul: 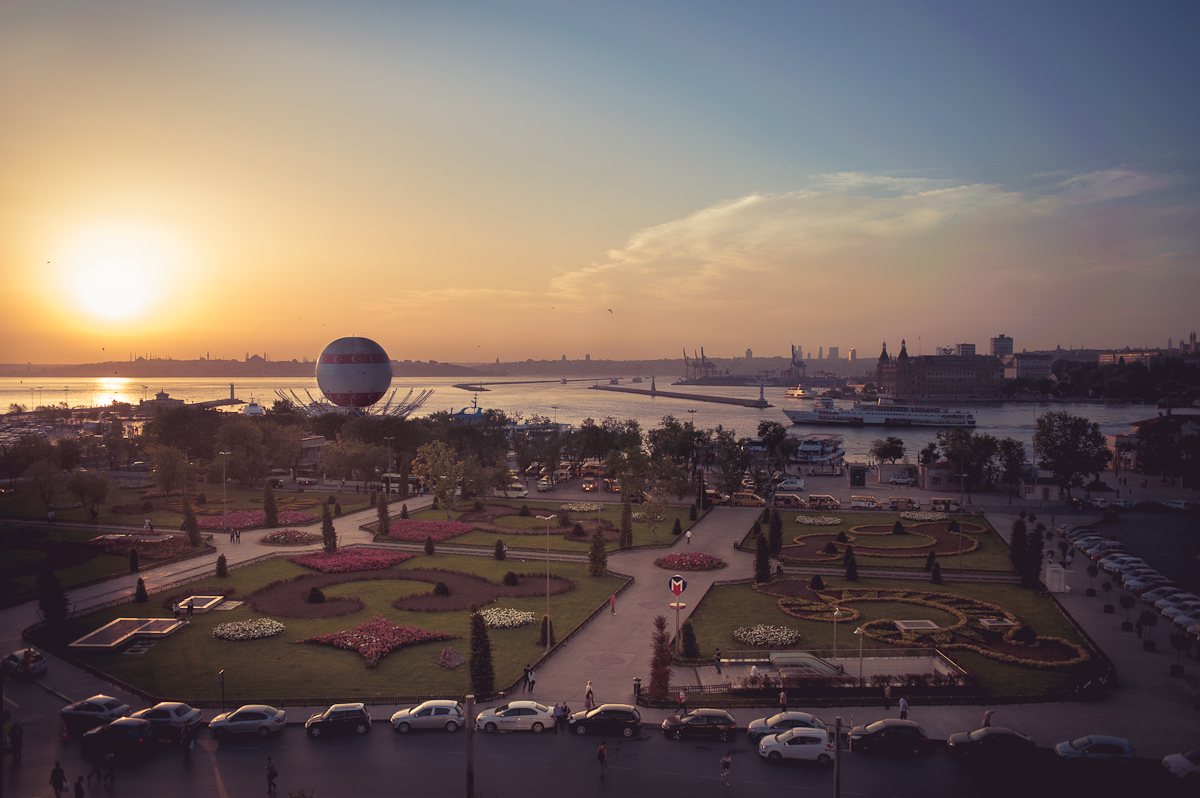 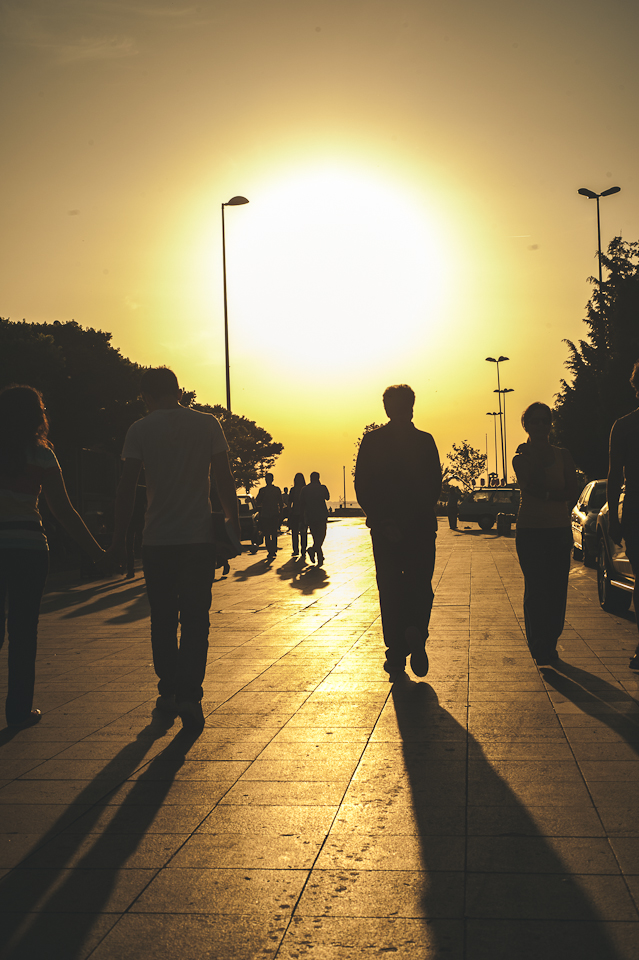 A great thing about traveling alone is that you are much more open to meeting other travelers. Here is a solid fella from Vermont that came over to Asia with me. In the background is the Old City with their two giant mosques. 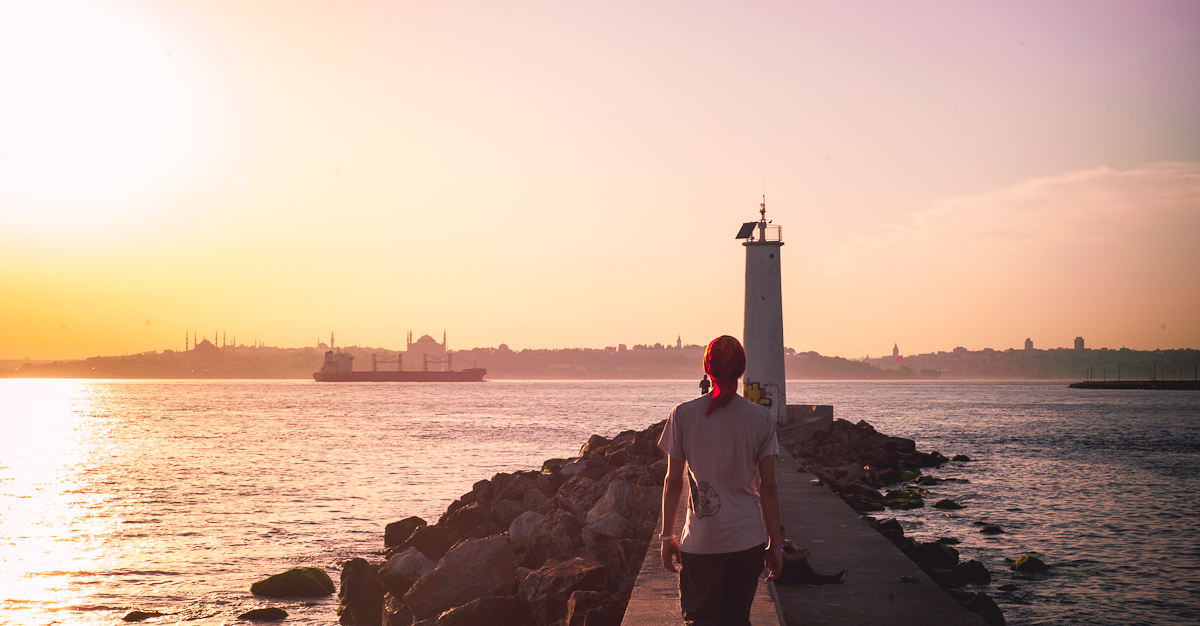 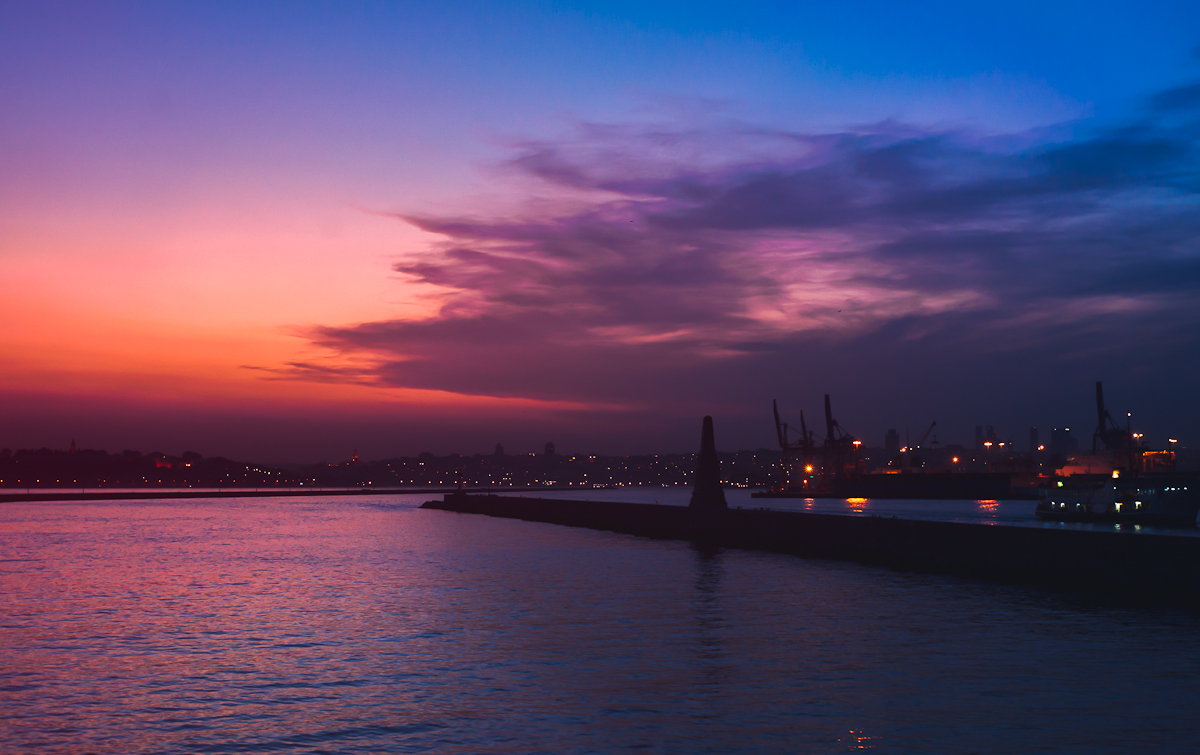 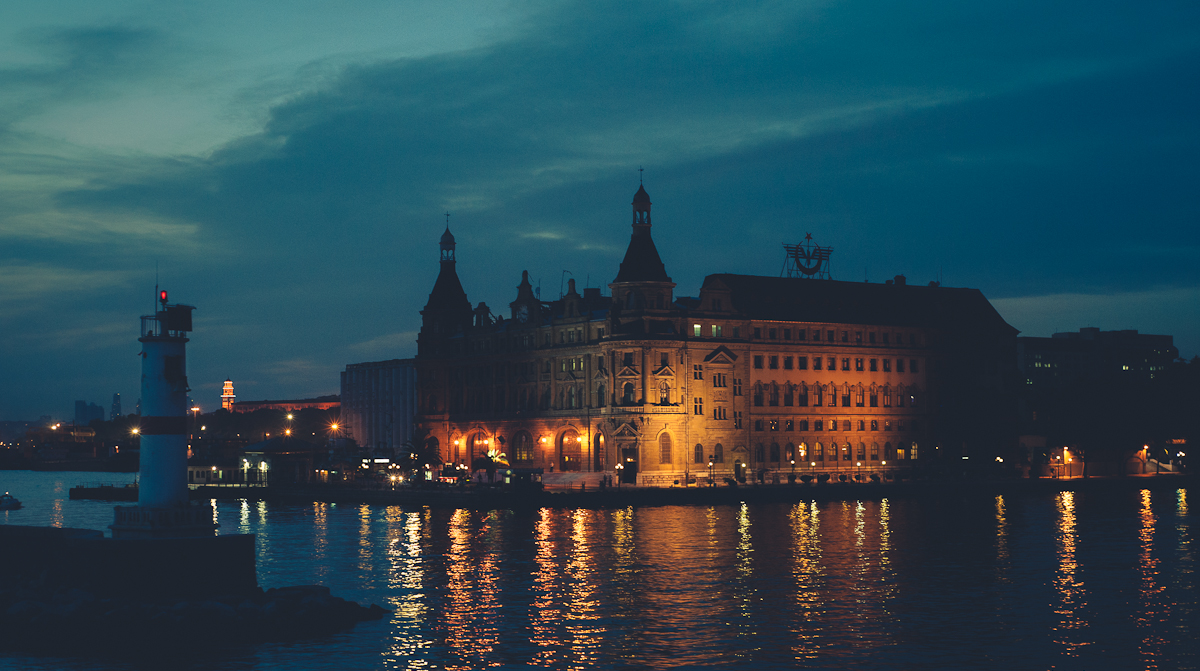 The mosques in the old part of the city were definitely worth a visit. Intuitively, the heart of the Ottoman empire would have large and impressive mosques. 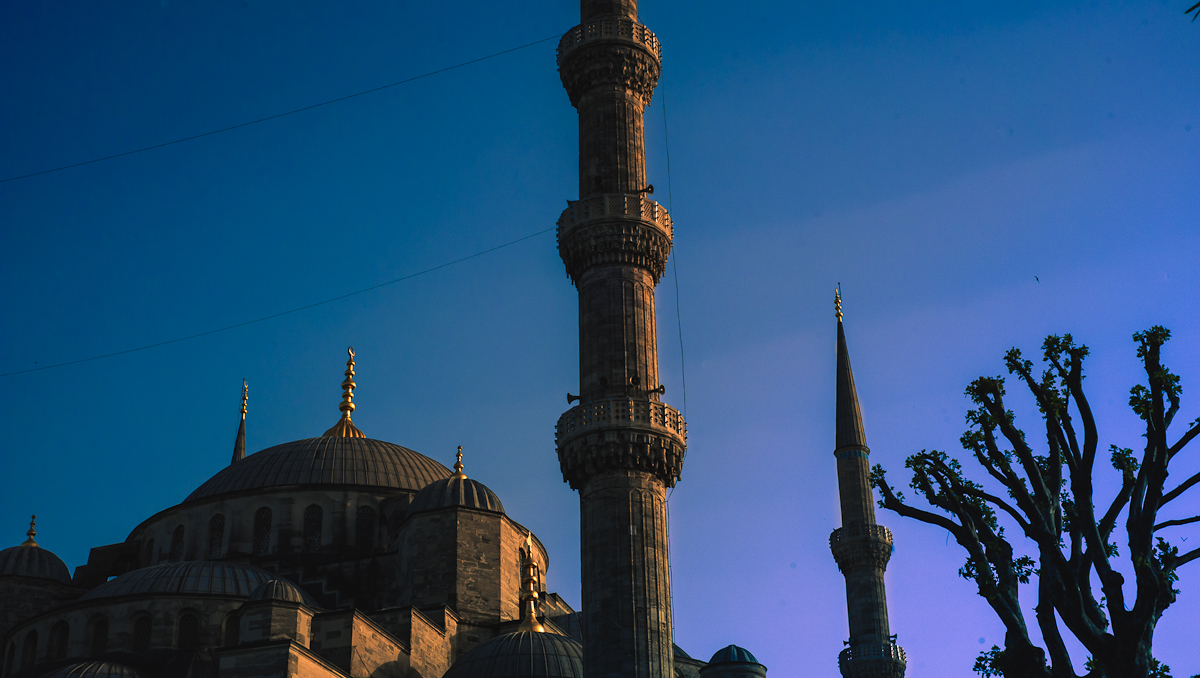 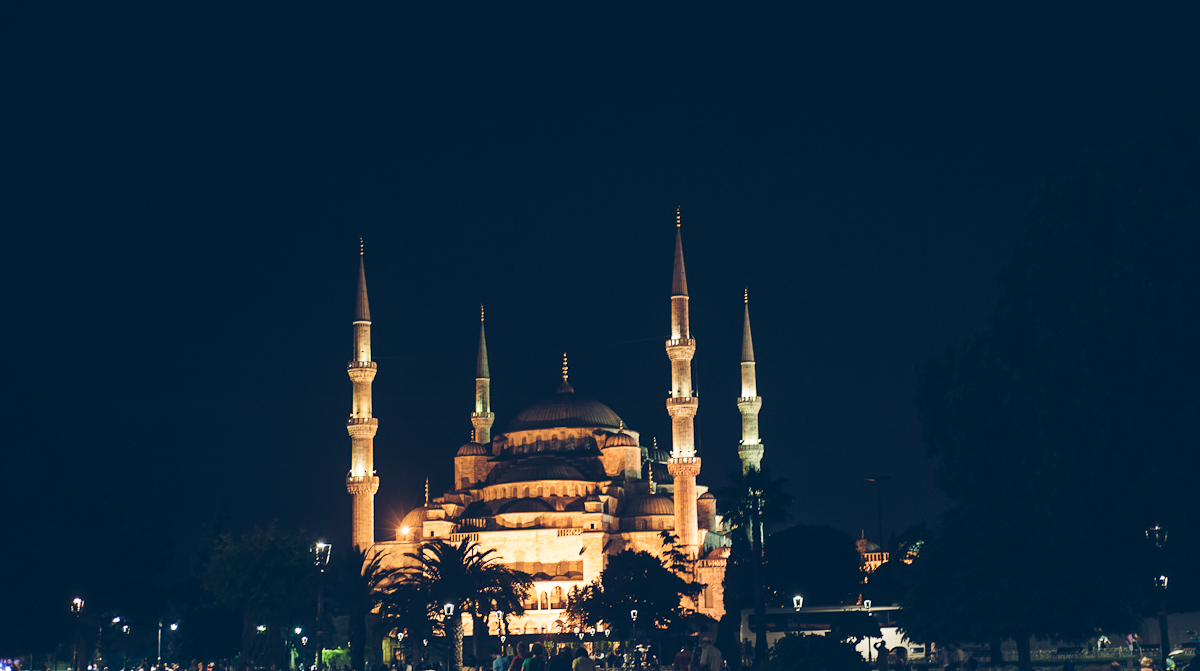 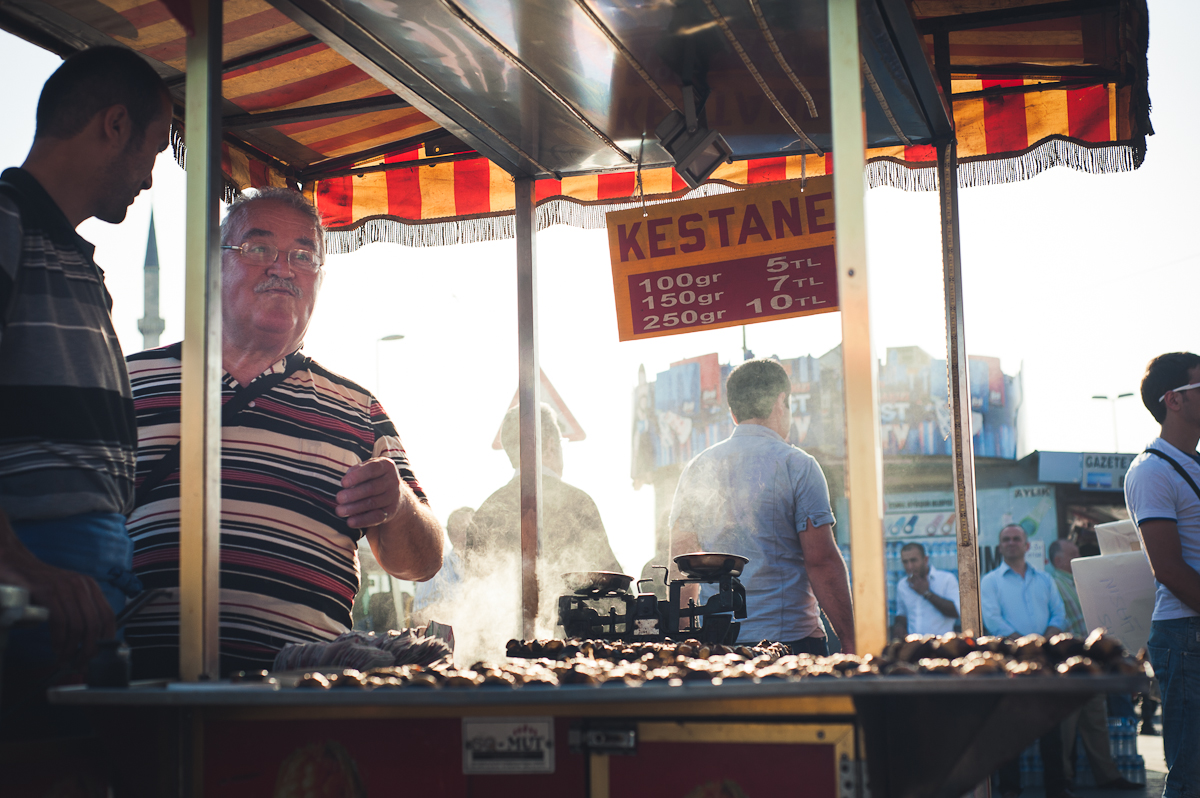 After two days it was time to move on. My island paradise awaited and being in a city of 37 million caught me completely off-guard. Time to take an overnight bus to Thessaloniki, Greece. I won’t get into too much detail, but that bus ride was one of those terrible bus rides people (including me) complain about. Bad roads, shot suspension and constant jittery turns that would smack my head against the window.

There wasn’t too much to report from Thessaloniki (point ‘B’ on the map). It is a pretty cool college town in northern Greece. It’s mountainous to the north with the sea to the south. As far as I knew, the good exploring areas required a car. Originally, I was thinking about going straight to one of the islands and start beach living. That is until I walked into the common area of the hostel in Thessaloniki and saw some pictures hanging on the wall. What I saw looked *AMAZING*. I had to go to that place in the pictures. I asked the lovely lady running the hostel what I was looking at and she said it was near Trikala (stop ‘C’ on the map). The next day, I was on a train to Trikala.

Let me interject for just a second and explain the reasoning for traveling like this – with no plan, no research, no schedule. Having a set schedule and knowing about the place you are going is definitely the safer bet but it can cause you to miss out on some awesome experiences. If you meet another traveler or local who says you absolutely must check something out you are free to do so. But if you have a hotel already booked somewhere else, chances are you won’t go see it and will miss out on a first hand and/or local recommendation.

Earlier, I stated that I was more interested in seeing the more rural parts of a country away from cities, Trikala/Meteora is exactly what I had in mind. The pictures in the hostel depicted a series of 6 monasteries perched on these massive rocks that shot up from the forest.

We made sure to get there super early and hike up to the monasteries rather than taking the bus. Our group was 3 Americans, 1 Swede and me, a Swedish-American. The diversity of our group was… well, we wouldn’t have made it into a College brochure.

Starting in the town at sunrise. 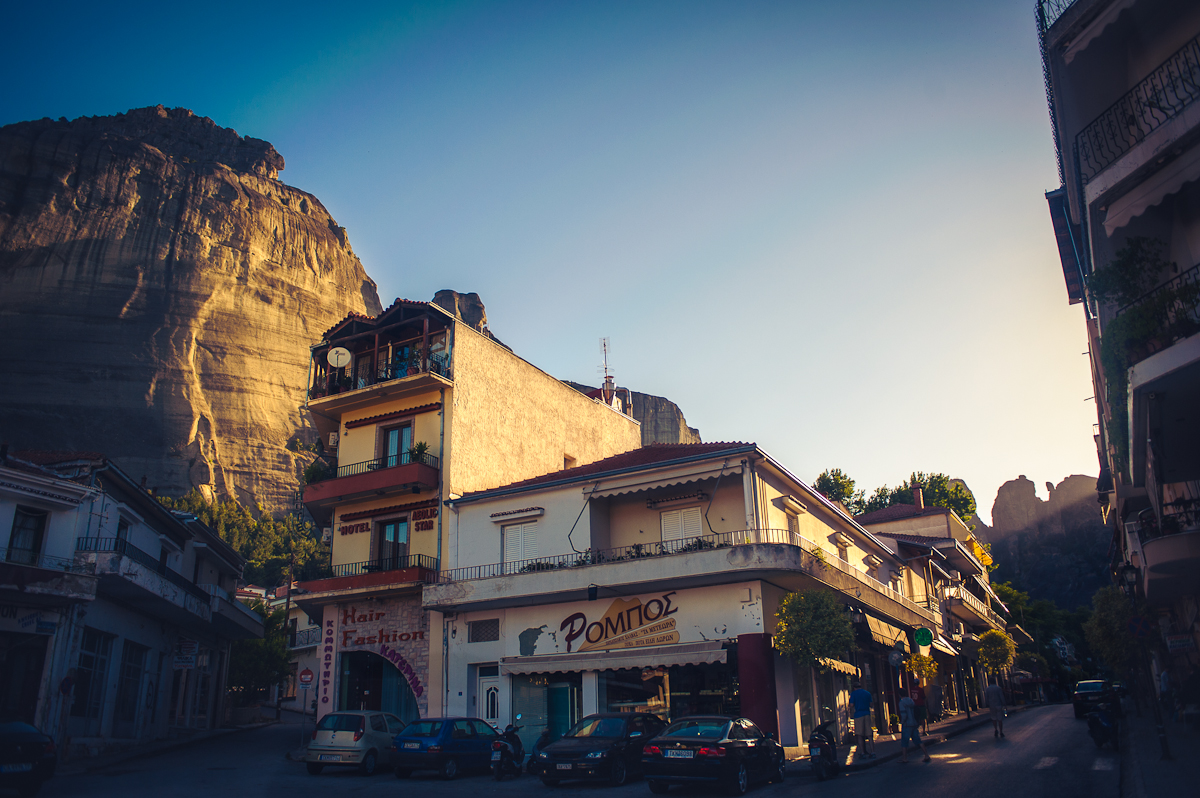 Making it halfway up. 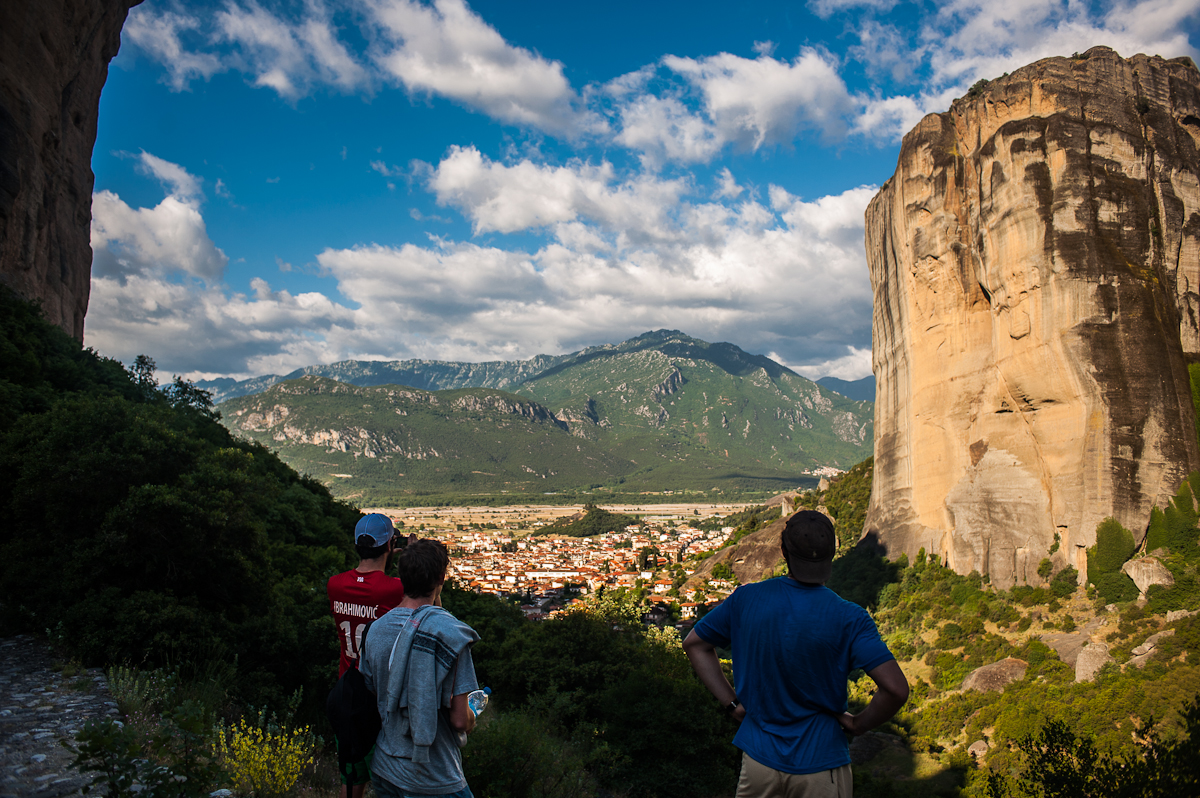 And finally at the top. 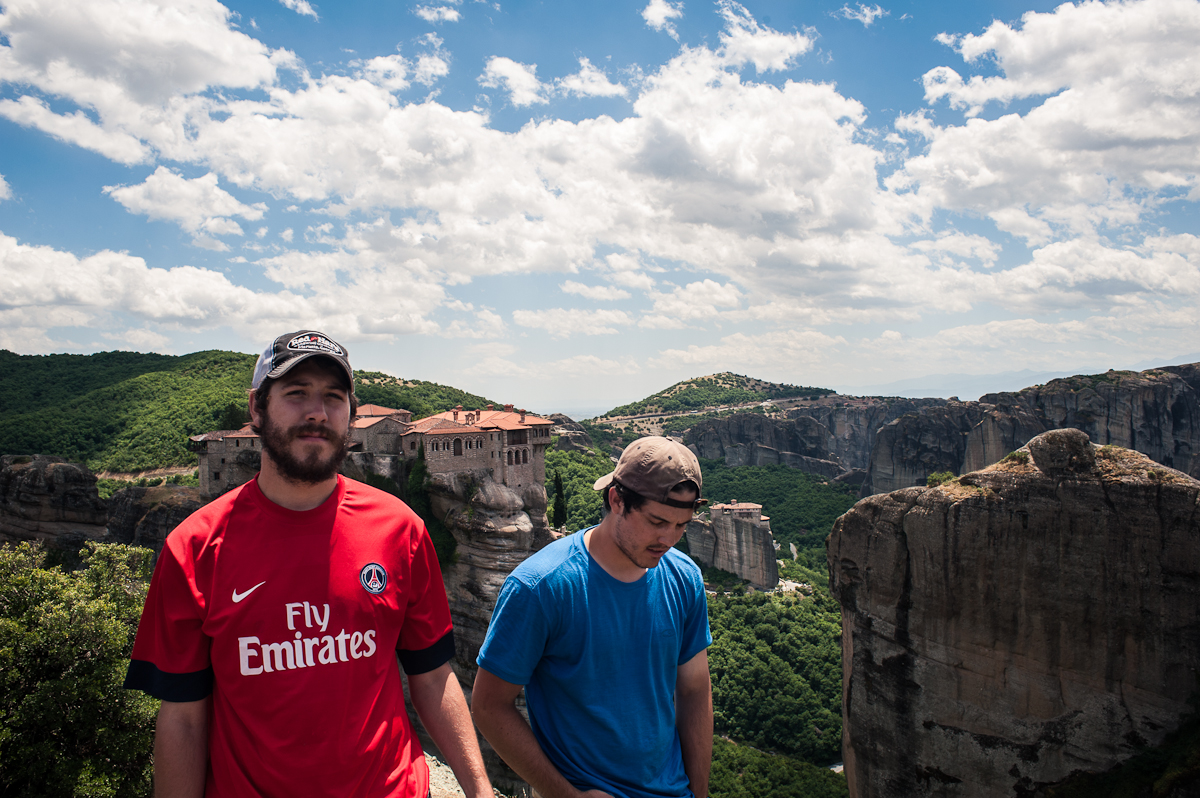 Photography of the monasteries of Meteora Greece

These places are too epic for words. 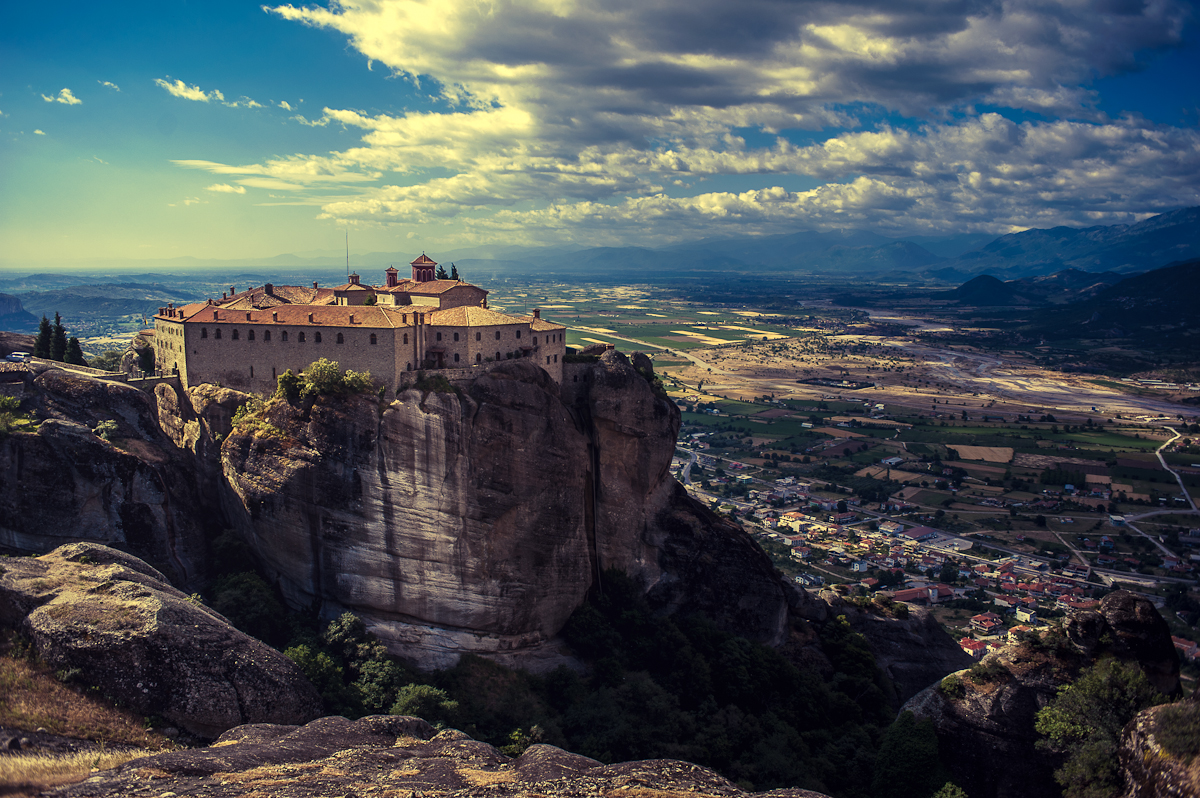 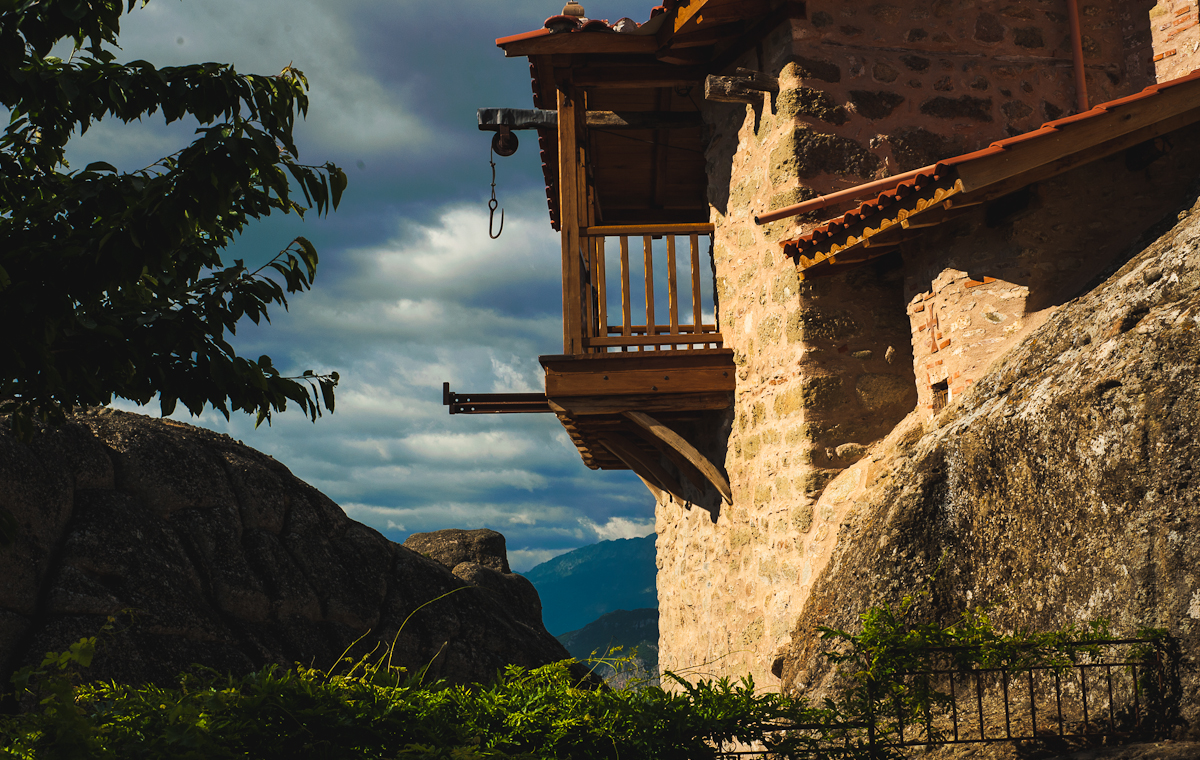 The monasteries are still active and some of the old school Greeks still go and pray. 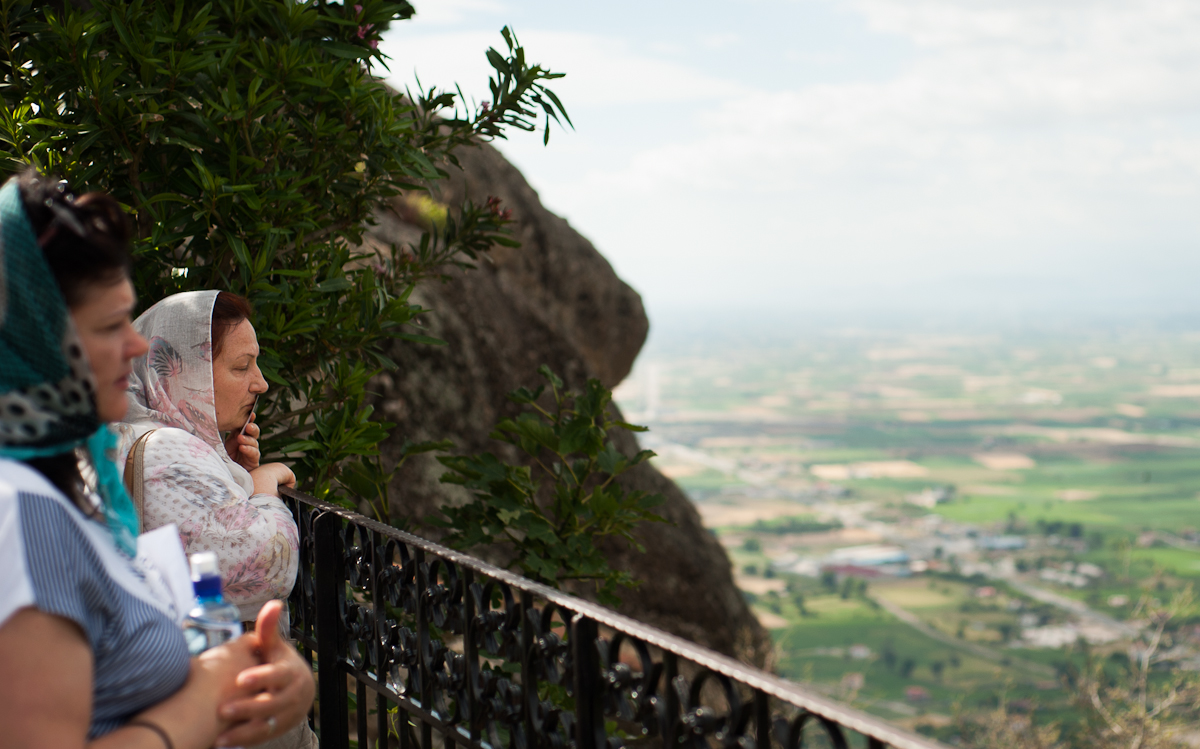 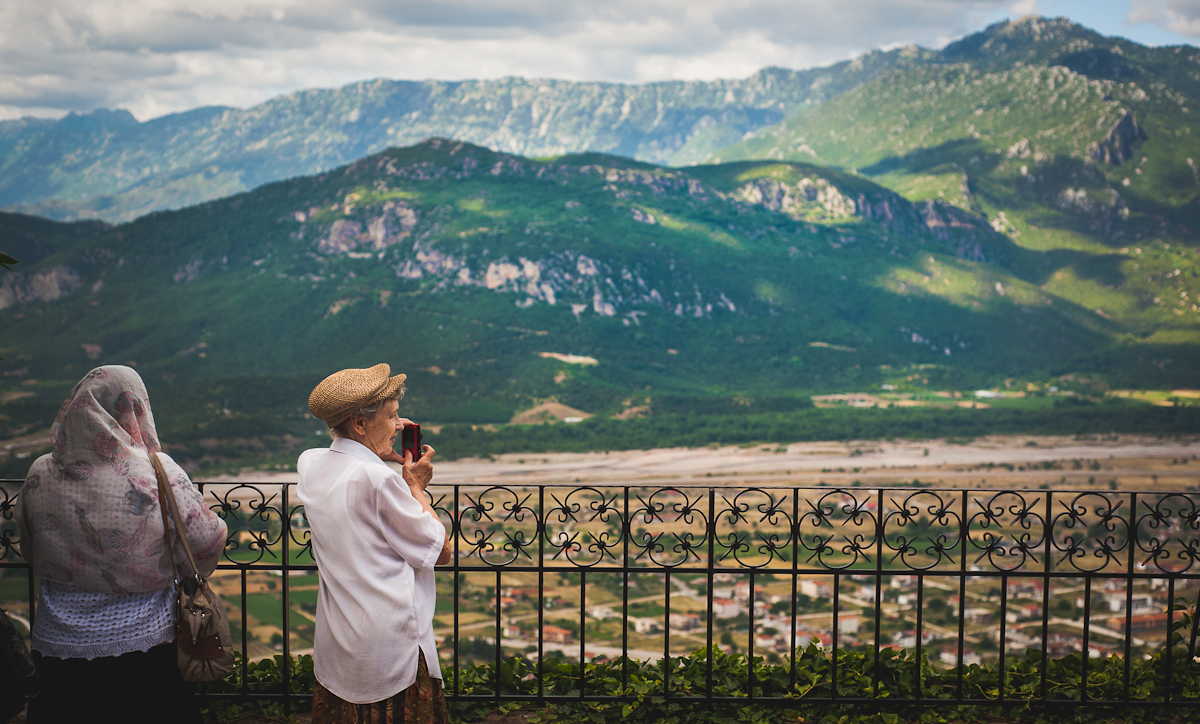 Inside one of the monasteries. 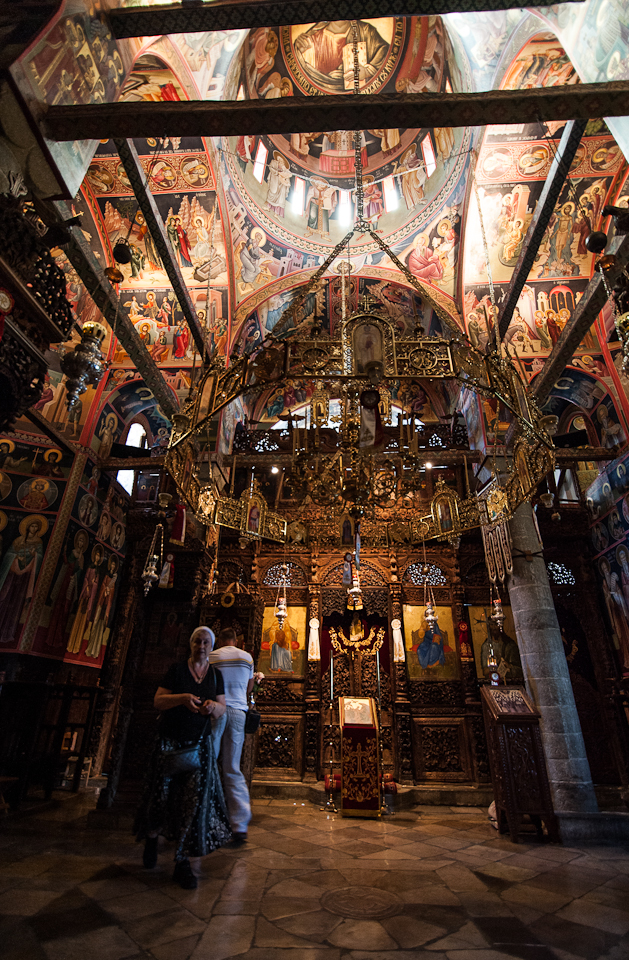 It was 1 pm and we had been walking since 8. We were getting a bit peckish and tired so we walked out to a secluded rock to rest and have a quick picnic. Well, as we were 5 guys, our picnic consisted of things we could fit in our pockets and didn’t take any sort of preparation. I.e. banana, granola bars, water. This bro-picnic eventually turned into a big hour-long nap. This was the lookout of the picnic/nap area. 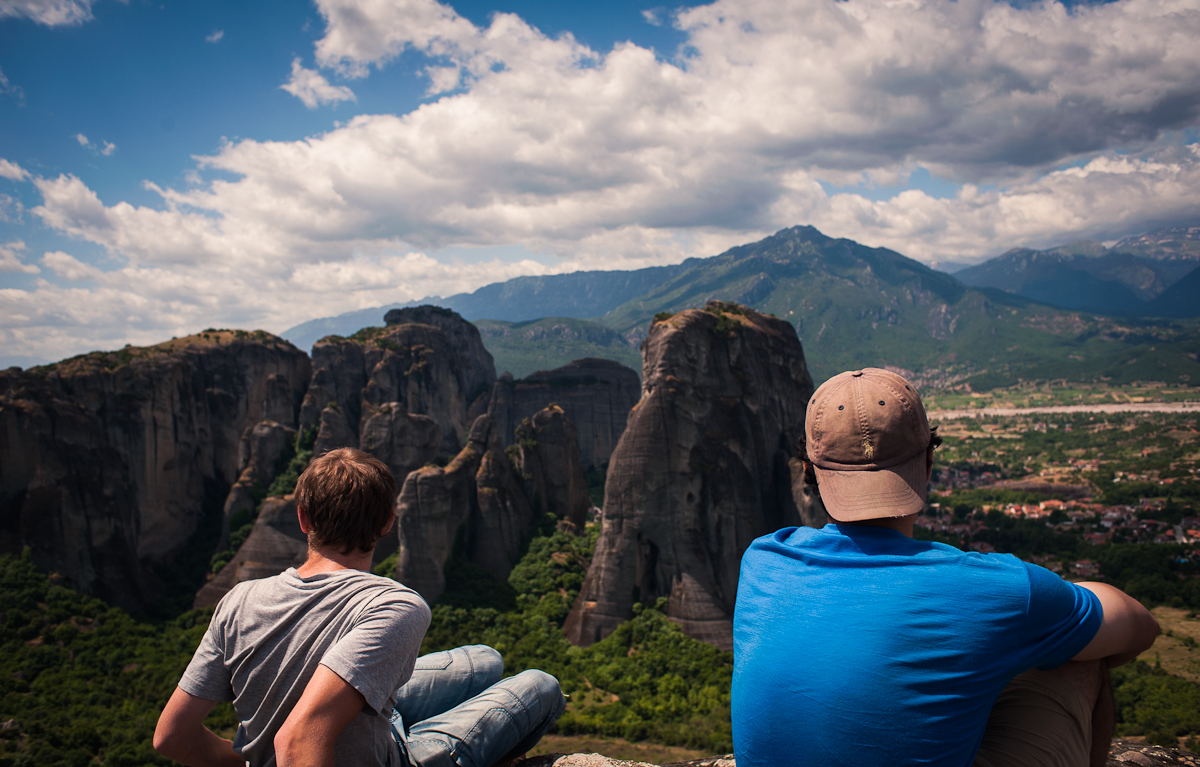 And the view from there.

This guy is zen as fuck. 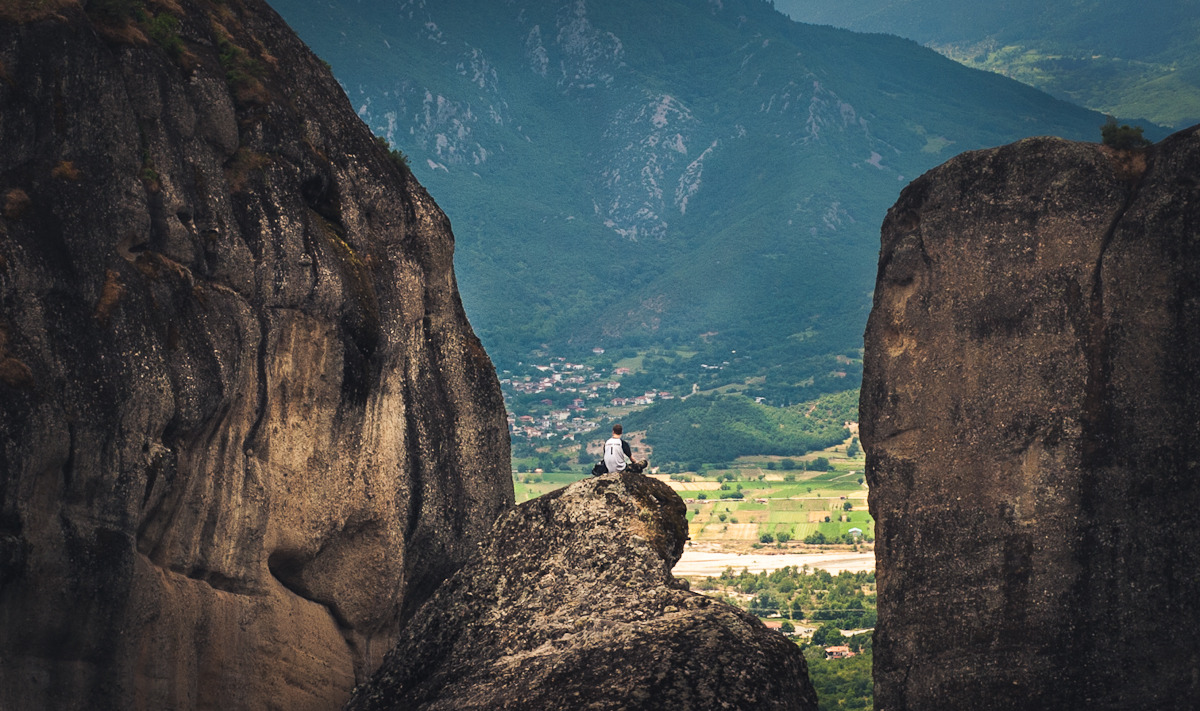 Our day of adventuring was coming to a close. We still had a good hike down and a bus ride back. On the way down we unexpectedly found a very well hidden cave. It was a fault cave that formed from the cracking of these giant mountain-rocks. Despite how secluded and hidden the cave was, there were bolts drilled into the wall for climbing. 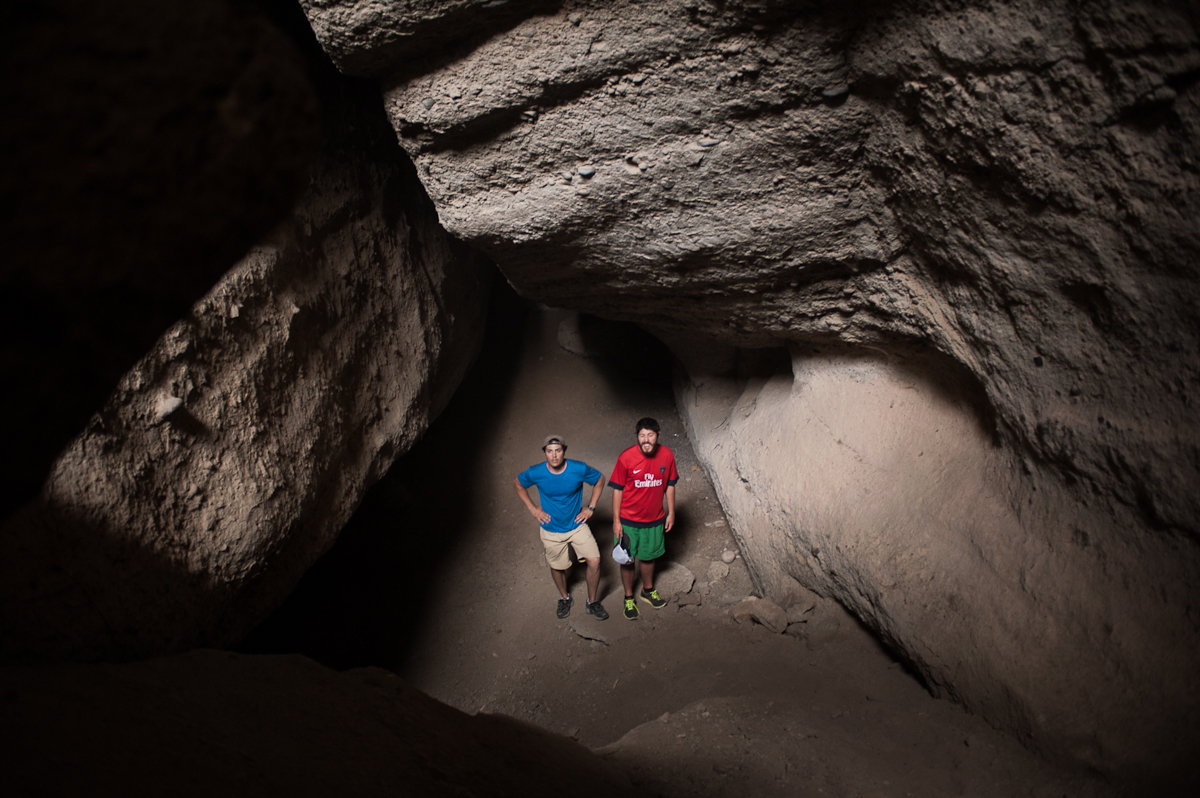 Back to Trikala to have a beer and rest our cramped legs.

Staying open and embracing the surroundings lead me to some amazing travel experiences. One of the most memorable happened while I was staying at Hostel Meteroa. Dimitris, the owner, and I were getting along famously. One evening while we were hanging out at the hostel, he gets a call and starts talking in Greek. I don’t pay much mind to it until he hangs up and just says “Shit.”. I look over and ask him what’s up? He says that he forgot that there was a wedding that night and his friends were on their way to come pick him up. I thought he was going to ask me to look after the hostel and just make sure everything got locked up at night. Instead he asks “You want to come?” Ummmm… Hells yeah. Going from a chill night in to a Greek wedding took a bit of mental readjustment but I was definitely stoked on the idea. I left my camera behind out of respect. I only knew one person out of the whole party and the last thing a newly married couple needs is a stranger tourist taking a bunch of photos. The whole crashing a Greek wedding thing was sort of a surreal experience but I was determined to openly embrace it. We ate delicious catered Greek food, sang, danced and I participated in the wedding as best I could. Someone did manage to catch me trying out some new Greek dance moves. It was towards the end of the night so a lot of people went home already. (I’m in the red shirt).

The Island of Corfu – one month of relaxing while spending 10 Euro a day.